I am trying to make the most of the unseasonable sunshine.  So I stole a few hours and headed off to Canada farm. Recently I have suffered from many of the seven deadly sins.  The first one is envy... More specifically Kingfisher envy...
Canada farm has the Kingfisher stick and someone I know got some stunning pics here.  Was I envious? You bet yah. Now I wanted a slice of the pie.
On my way to Canada hide I suffered another deadly sin,  Gluttony.  I casually stuffed my face with Beef flavoured hula hoops. Whilst I was tucking in a Jay flew nosily across but I was to busy feasting to catch a shot.
At the hide all was quiet.  I sat for a good half an hour waiting for something interesting to happen.  As I was about to nod off a Bittern flew from pretty much underneath me.  I wasn't ready and it was gone before I even had chance to turn the camera on.  Immediately the sins re appeared.  Wrath was building up already...

In order to calm myself down I quickly located my tuna roll.  Obviously the Cormorant could smell it. 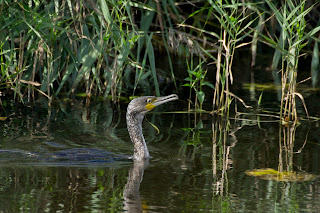 Sorry you cant have my tuna (Dolphin friendly)

Then off in the distance I noticed a small white blob.  I checked with my binoculars first, looking for a yellow bill rather than a black one.  Sure enough the only egret on the pond was a Cattle! 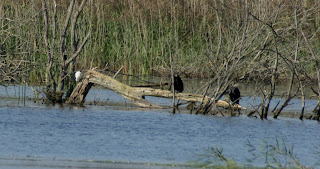 Following on from the worst Great Crested grebe pic ever taken.  My follow up is the worst Cattle egret picture ever taken.  If you use a magnifying glass you will note the yellow beak.  The two black things are not bin liners but are in fact cormorants.

I had a bit of a chat with all the nice people in the hide, whilst watching 2 Marsh harriers and a Hobby.  All too far away for photos but good to see nonetheless.  One couple had come from the Scottish highlands and were really enjoying the wildlife the levels offered.  I felt pride (another sin).
Conversation invariably got on to the Kingfisher stick.  Which had not been used since I entered the hide.  In order to let everyone see a Kingfisher I headed over to the new hide at the Hawk and Owl Trust.  There are lots of feeders here and loads of little birds flapping about.  I only managed a few Wren pics which isn't really very impressive but there you go. 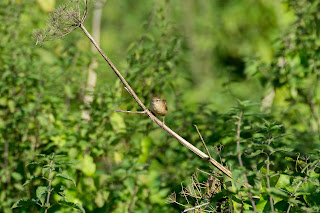 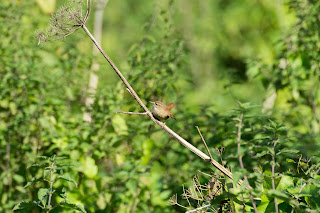 On the way back I met the chap from earlier.  He paused and got his camera out.  I knew exactly what he was going to show me... A Kingfisher in lovely light, perched up nicely.  Here I felt envy again but I reckon the gentleman felt pride (he had taken a sin for the team).

So as I type this up, feet out on the stool.  Bum plonked firmly in the armchair I would consider that I am representing a little bit of sloth.  Sadly I haven't covered lust yet.  Maybe later tonight? If I'm lucky...