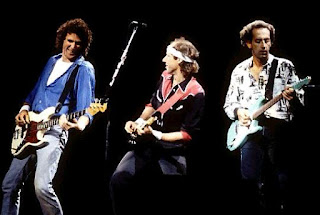 I had intended do go for a few early morning walks to the reserve opposite the hotel (Punta de n'Amer) but it never happened.  Instead I managed some late walks there before dinner time.

The area is full of pine trees, dunes and boulders and ... joggers.  Literally everywhere.  Whilst I admire their sportiness and toned physiques (I'm still working on mine, 36 years and it still hasn't happened).  The amount of footfall surely affects what wildlife might be around.

Nevertheless I did see some odds and ends. 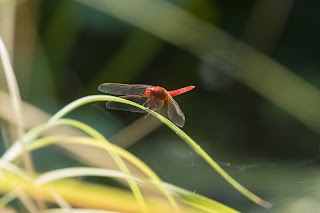 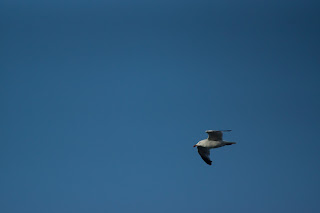 Audouins Gull - last years Menorca post had much better pics of these. 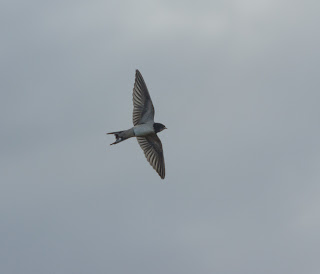 Swallow in a surprisingly cloudy sky - probably thought he was in the UK... 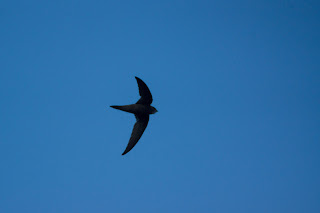 Same for this fellow 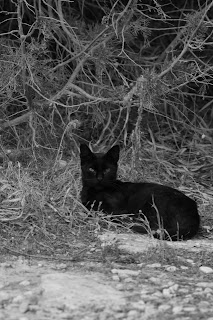 I bet he has eaten plenty of lizards,birds etc in his time :-(

At the end of the trail lies a small fort which gives great views from the top. 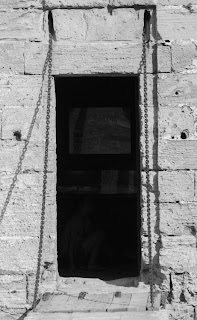 The way in (looks like its occupied by Gollum) 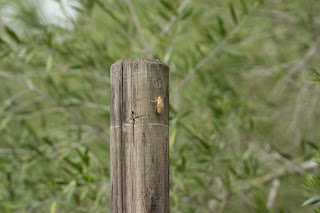 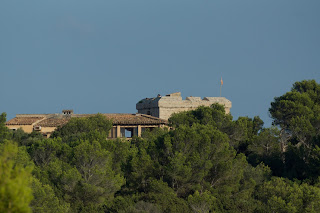 View of the fort 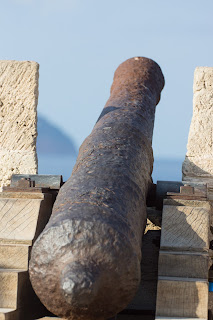 Cannon jutting out to repel baddies 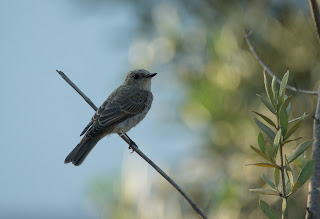 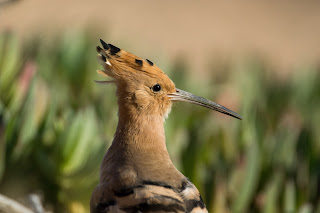 This Hoopoe has digging around near the fort.  Luckily I was in a trench and could sneak up on him 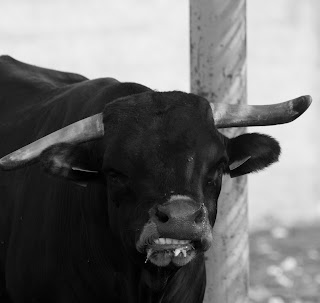 He looks hard as nails but was actually a soft sod.

Okay, so now you are thinking what has he called it Dire Straights for?

Let me tell you.  One morning I awoke to some slightly cooler weather.  The Boss said it would be fine for me to go on a cycle ride until dinner - this part is vehemently denied by my better half.  But that is what she said...

The hotel had free bikes, so off I went.  In my mind I had planned to go to Alcudia, more specifically the s'Albufera reserve.  Cant be that far... Oh and I didnt have a phone.

Started off alright, bit hilly but nothing to severe.  After a couple of hours I was in the very pleasant town of Arta, which does actually feel Spanish and is less polluted with T-shirts, beer and bad tribute acts. 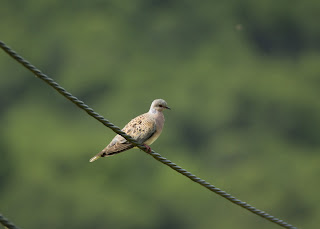 Turtle doves were more abundant in the countryside.
This one played a cruel trick on me (read on)

Quick break at Arta.  Traffic was heavy because a tree had just collapsed!

Next stop to look out for would be Sa Coma.  This is where things got more difficult.  I should have cut my losses.


I was drenched. Wearing any clothes was pretty pointless tbh, but I didnt want to get arrested.

It took about 20 minutes to subside and off I went again, through Can Picafort (looked tacky to me) and on and on.  Then finally s'Albufera.  I was finally here.

And what an entrance! An Osprey perched up on a pylon right in front.  I hurriedly pulled out my camera... Nothing.  Dead battery.  It was the Turtle Dove's fault. I had left the bloody camera on...

Its the dot on the pylon

There were egrets of all varieties hanging around along with dozens of Squacco herons (a first for me).  A quick time check revealed that I had about 30 mins if I was going to get back before dark (it had taken me just under 4 hours...)

Its a great place and well worth a visit (just hire a car or get a hotel in Alcudia!)

I took a big breath and back I went.  This is when things went wrong.  My lack of fitness reared its ugly head plus the way back felt steep as hell.  An hour in and I was struggling and thirsty - except I had drunk my bottle dry.  Added to this the front tyre had got very soft and I didnt have a pump.

I was knackered, seriously knackered.  Weird black dots in the eyes and all.  My legs had seized up and I had to dismount and walk.  The situation wasnt helped by a cocky foreigner (I wont say what country as I dont want to cause a war) who drove passed in his jeep laughing and jeering.  Tosser.

That road was so bloody long and I felt so awful.

After 2 hours I had made it back to Arta.  I was seriously dehydrated but there were shops... Except they were all shut.  Bloody hell.  Resting in the afternoon. Pah, what nonsense.

Then God himself took pity on me...

There was a 2L bottle of sealed water outside a house on the pavement... Yes I did take it.  And I am sorry but it was that or passing out. 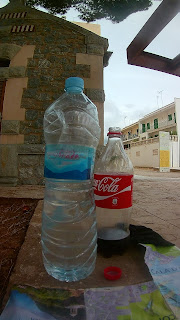 After peddling round the corner to safety I drank 1L there and then.  I then blundered my way to the old train station.  There I located a shop that was open.  The man behind the desk asked if I was okay... I must have looked bad.  I bought a big bottle of coke and 20 mini muffins...

After 20 minutes there was nothing left.


The old Arta train station, viewed from the floor.

Once more God thought I deserved a bit of a break.  I found a cycle trail which went back roughly homeward.  Except that after the first 10 minutes back in the saddle the front mud guard somehow twisted and jammed its in the wheel.  By that point I couldnt do anything in a dextrous fashion and I simply wrenched half of it off.  Problem solved.

The cycle track was great, taking me through little farms and vast valleys.  Booted eagles in the sky and no camera to get them with...

Nearly 5 hours in I got back...60 miles of cycling/walking/shambling under my belt.

There was silence for just under 24 hours.  The Boss wasnt happy...

I was still in dire straights... 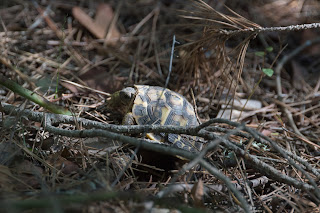