Boxing day, you have to get out don't you. Brisk walks at christmas are a tradition. Its got to be done. So fortified with Riverford minced pies I wrapped some provisions in a polka dot handkerchief, stuck it on the end of a stick over my shoulder, slipped on my thigh high boots and with a slap of my thighs me and the cat set off for London. Oh hold on thats another story isnt it! Ok so I was fortified with minced pies but I was on the EFRS prefered mode of transport my bicycle. The clouds didn't look very friendly and by the time I got to VP2 at Ham Wall the drizzle set in and the light was as black as Dick Whittingtons hat.
An hour there resulted in nothing other than a friendly (If they can be) Buzzard who flew around for a bit, landed in a tree then flew to the opposite river bank. Seemed quit unconcerned for a change. Probably like the rest of the wildlife around it wasn't particularly in the mood to do anything. It felt like a lazy day all round. The rain and cloud subduing everything. And like us they probably filled their bellies yesterday on a ridiculously warm and sunny christmas day. This was definitely not raptor weather. 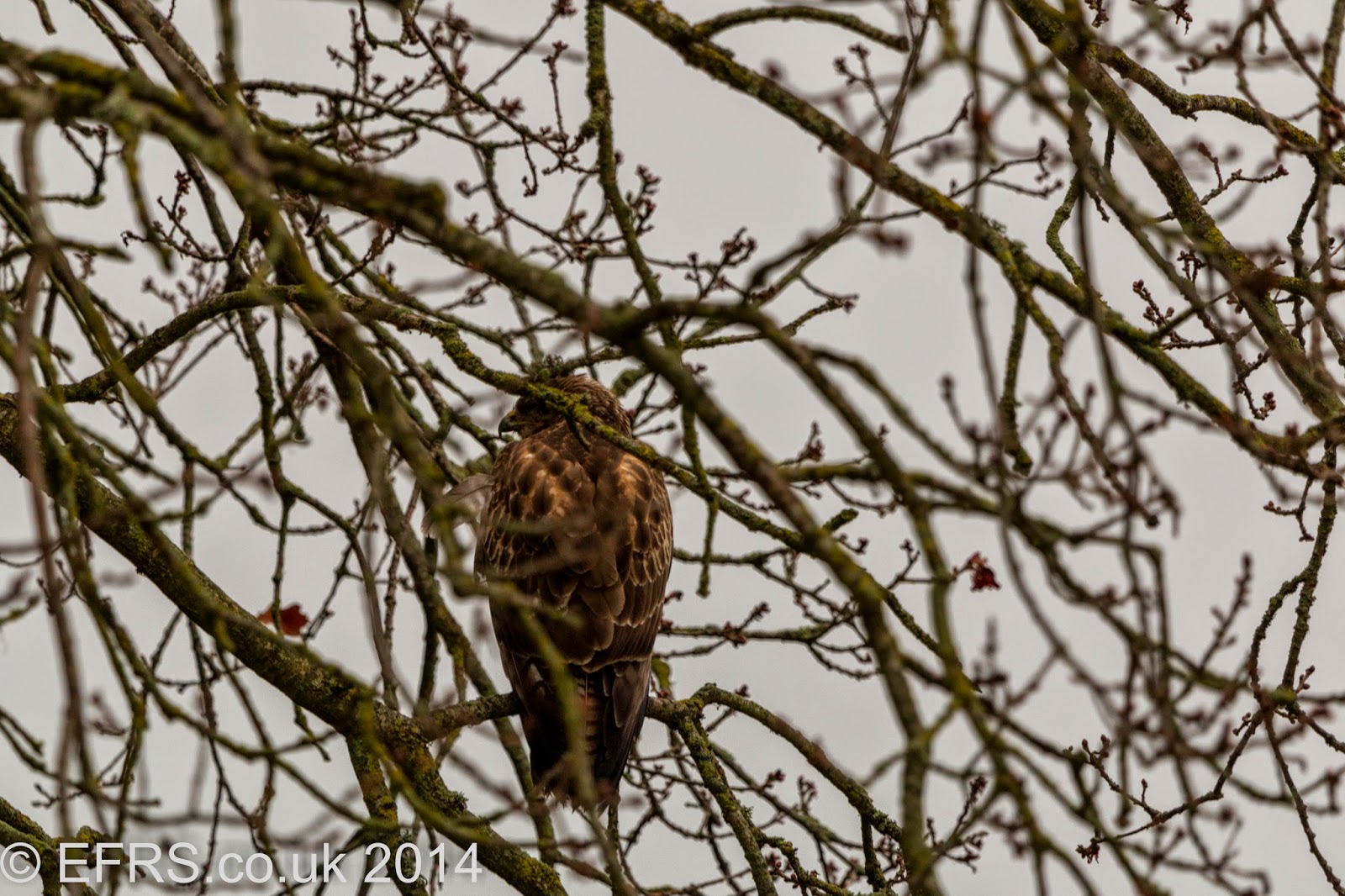 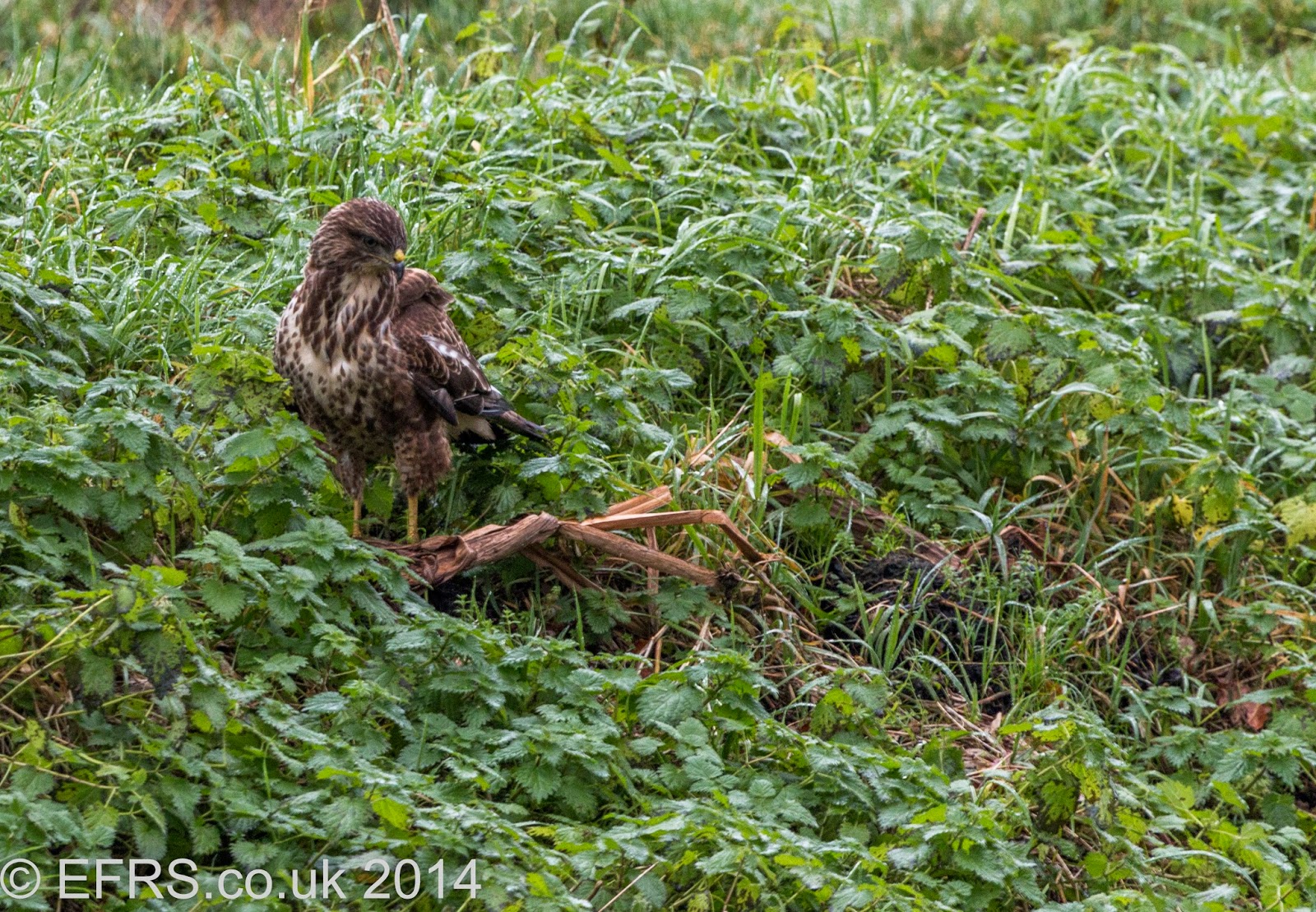 An hour or so standing in the drizzle looking at a glorified puddle with some weeds around it wasn't my idea of fun anymore. You can tell the mood I was in cant you! My nearest bolt hole was going to be the Tor Hide. Unsurprisingly the first human encounter of the day was here. A few casual walkers and a hard core cammo'd up birder looking a little conspicuous against the nice high vis walking wear of the others. Always brings me an ironic smile when I see this especially when I'm the culprit.
So the main point of interest was a pair of Water Rails which were feeding right in front of the hide. Water rails, funny little buggers. Now all birds have their quirks but there is one thing about them that strikes me. They are as common as muck in reed beds, you hear them constantly making their hysterical cackling cries but never ever see the bloody things. Then on an odd occasion such as this they will saunter right in front of you without a care in the world. I did have a quick look over my shoulder for James who has an uncanny knack of attracting these birds.
Now before we get to the pictures I'll just say hello again to David Thomas who I met there. Due to the lack of anything other than the Water Rails which had started to become a bit 'done that' we moved onto photography. We had a very interesting chat about camera clubs, its politics and what they should be about. But even more interestingly the philosophy of it all. What you look for in a picture, what you want to capture. The texture? the colours? the composition? the emotions and all that sort of thing. I've started to take pics of stuff other than wildlife so this interested me greatly. Im still at the stage of discovering what I want to capture in that world outside birds. There are a few examples of this other side in AOB (Any Other Business).

With this conversation in mind and bearing in mind I wasn't particularly composing these pics, I was just 'snapping' them to be honest, here they are with a little self indulgent pompous drivel for accompaniment. I won't blame you for saying 'It's a few pictures of a Water Rail get over it'. 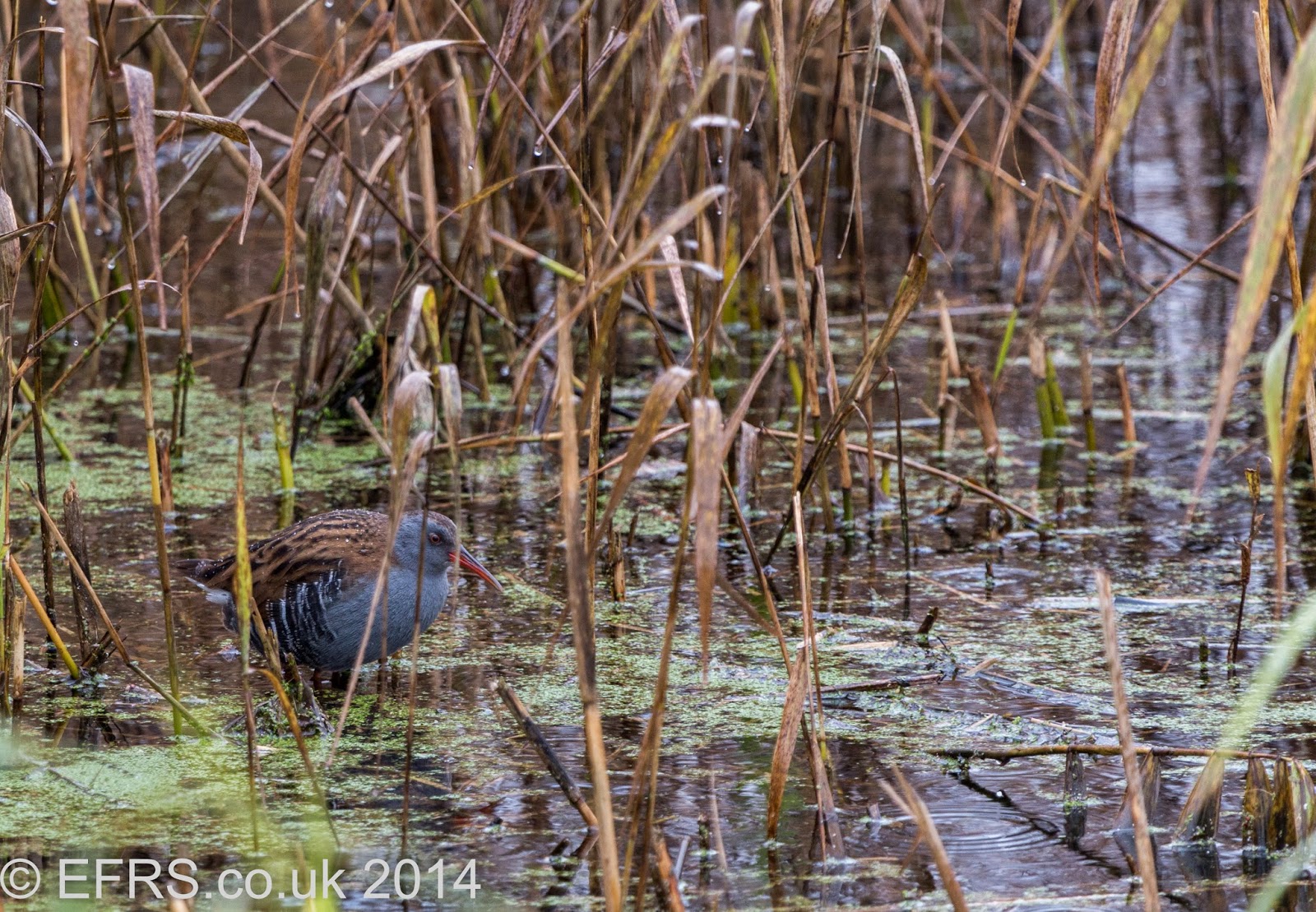 This is the best one I think. Lots of detail and the bird is in context. Eye in view and focused. Colours balanced with the browns and bluey greys matched by the same in the bird. 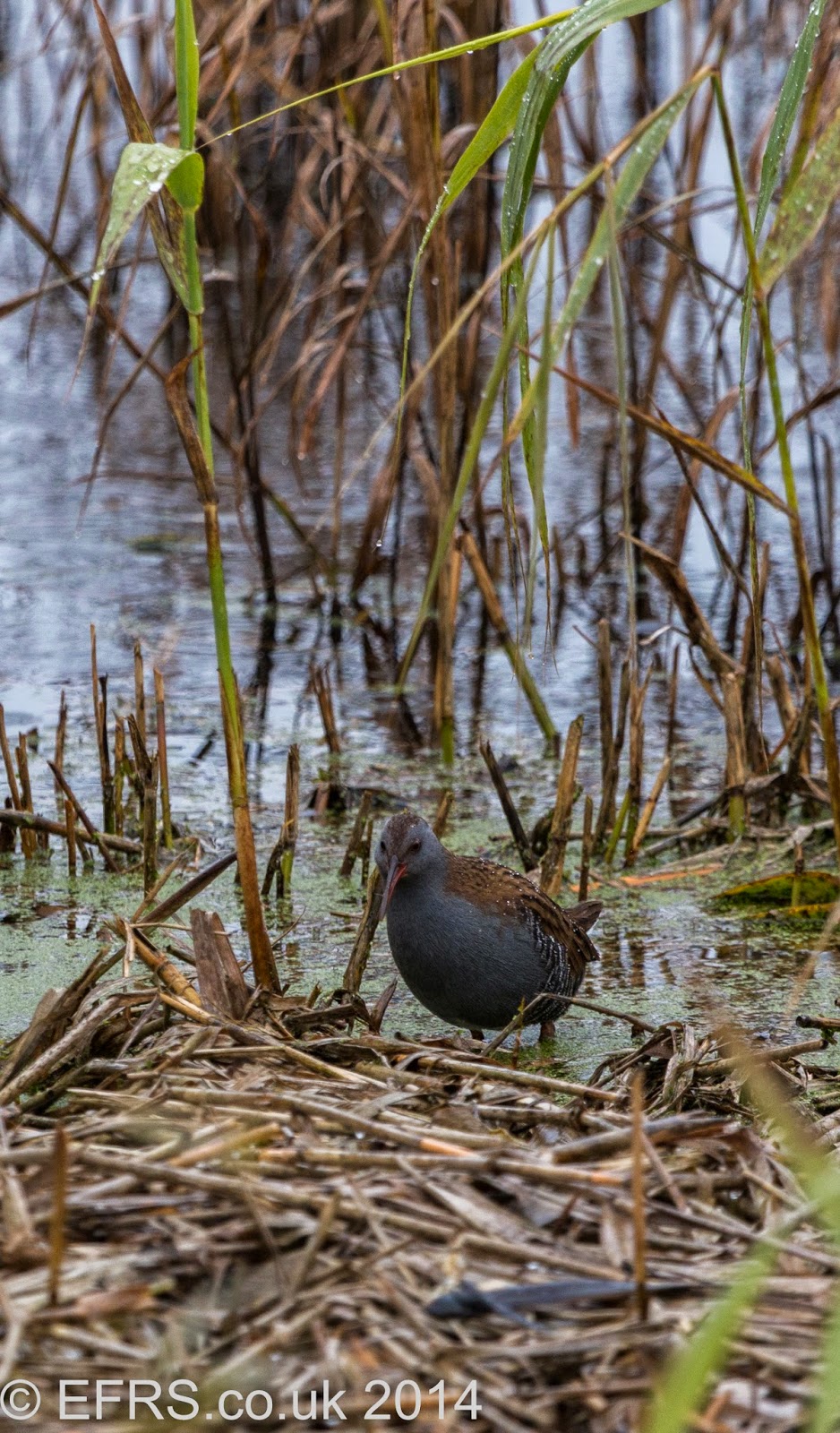 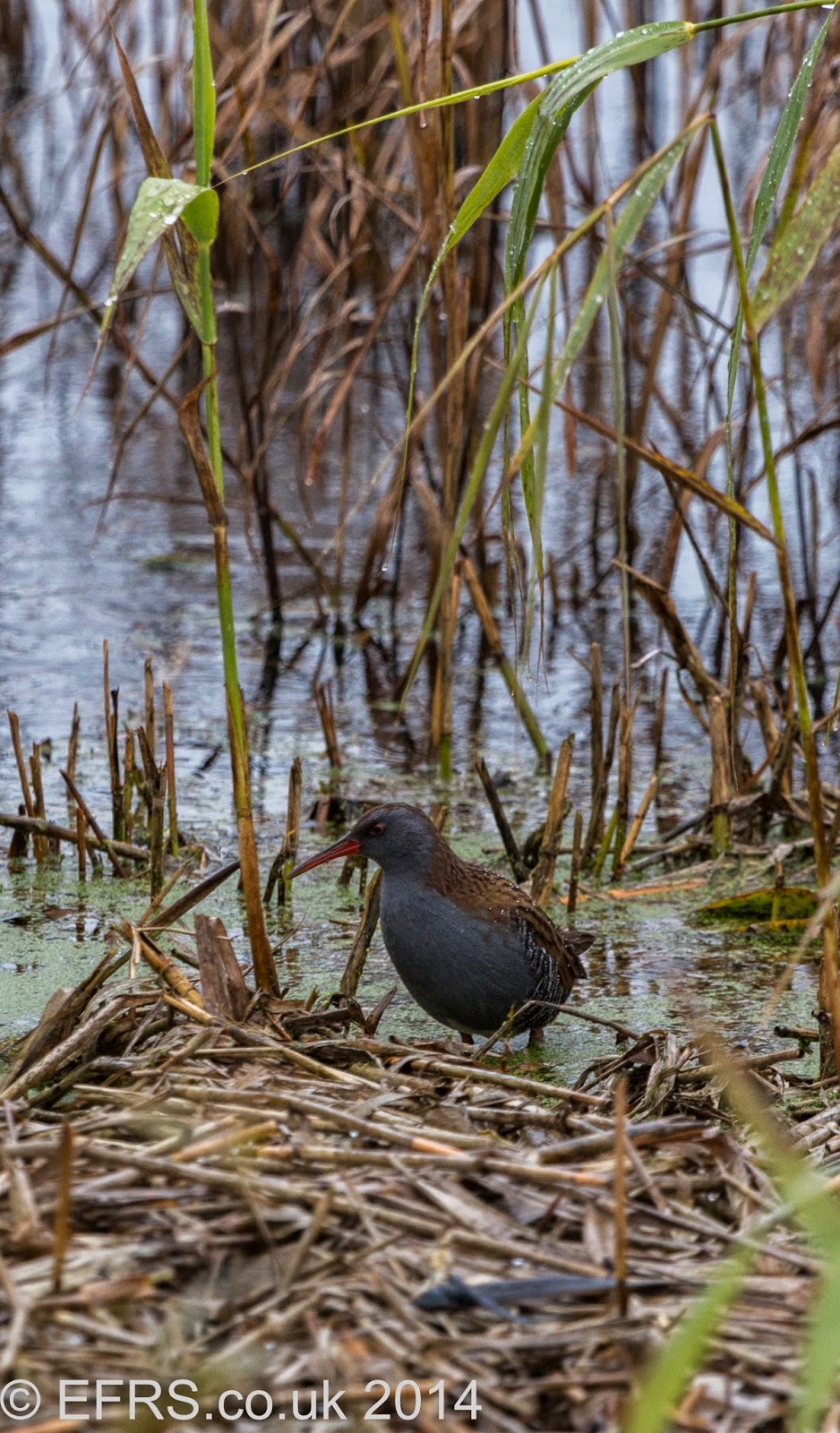 You know when you can't decide between two pictures? Well neither can I. The portrait aspect is intended to emphasize the tall reeds. 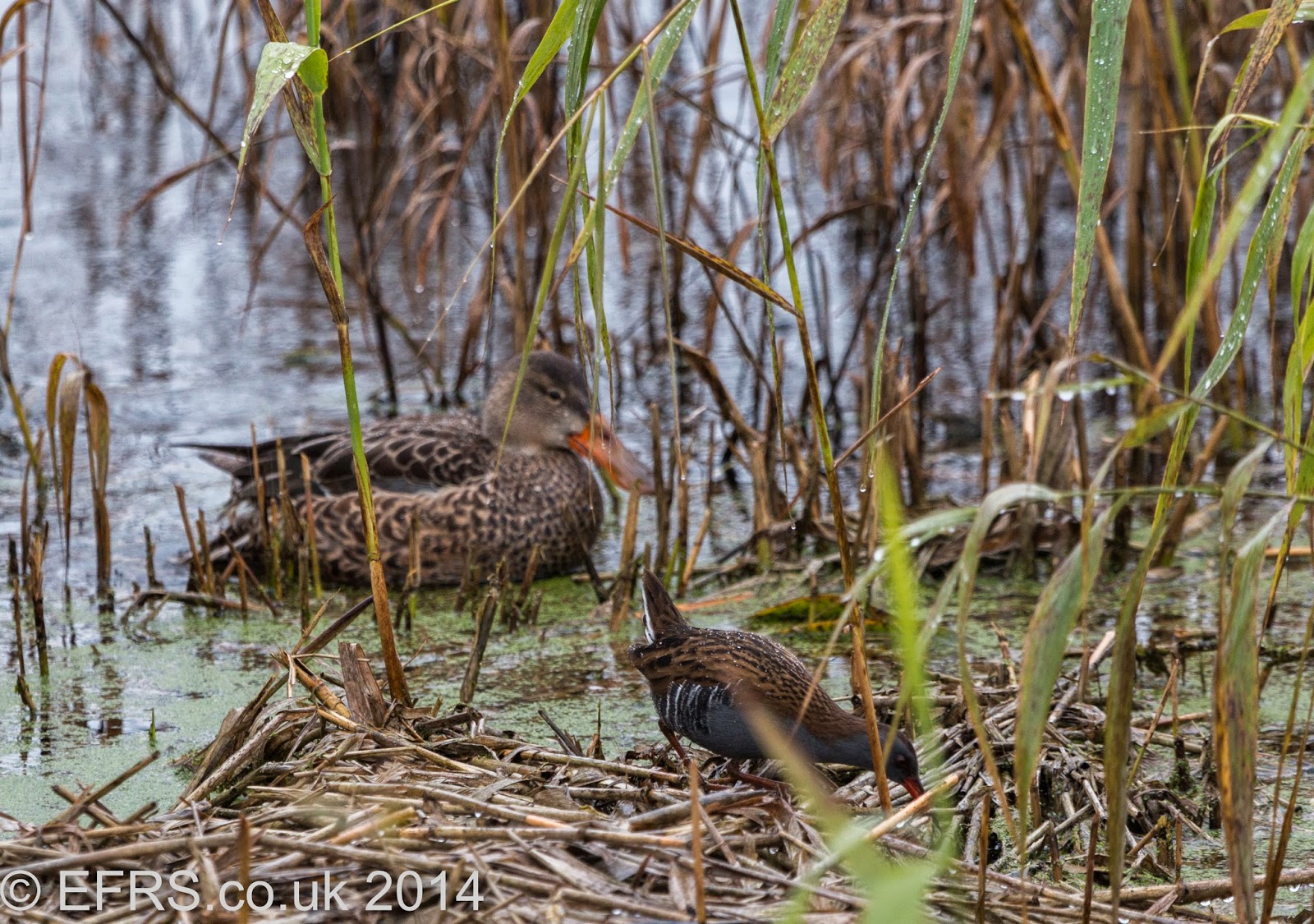 A bit of interaction with a Female Shoveller 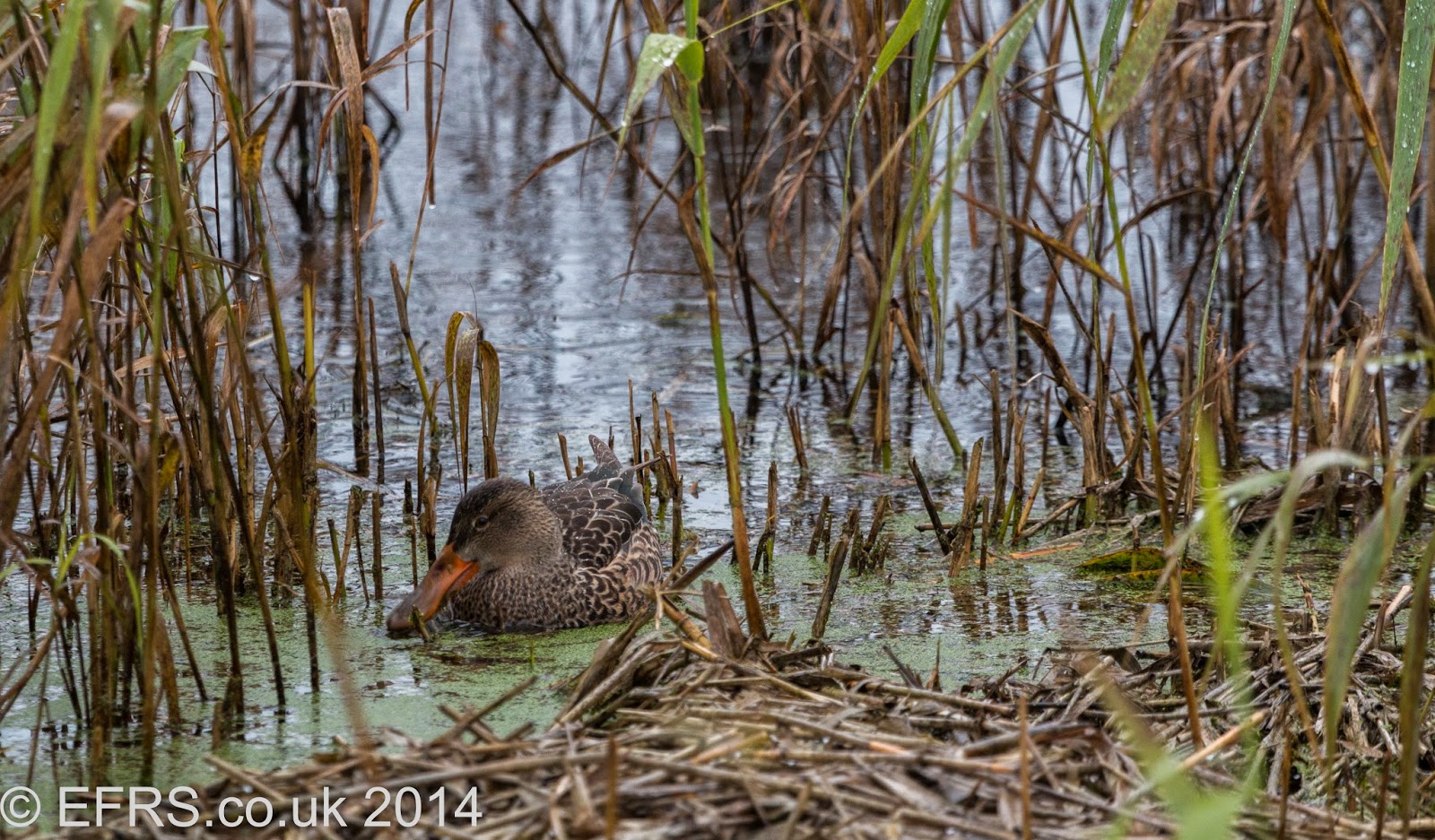 And here she is on her own. Again I like the busy scene with her blending in. 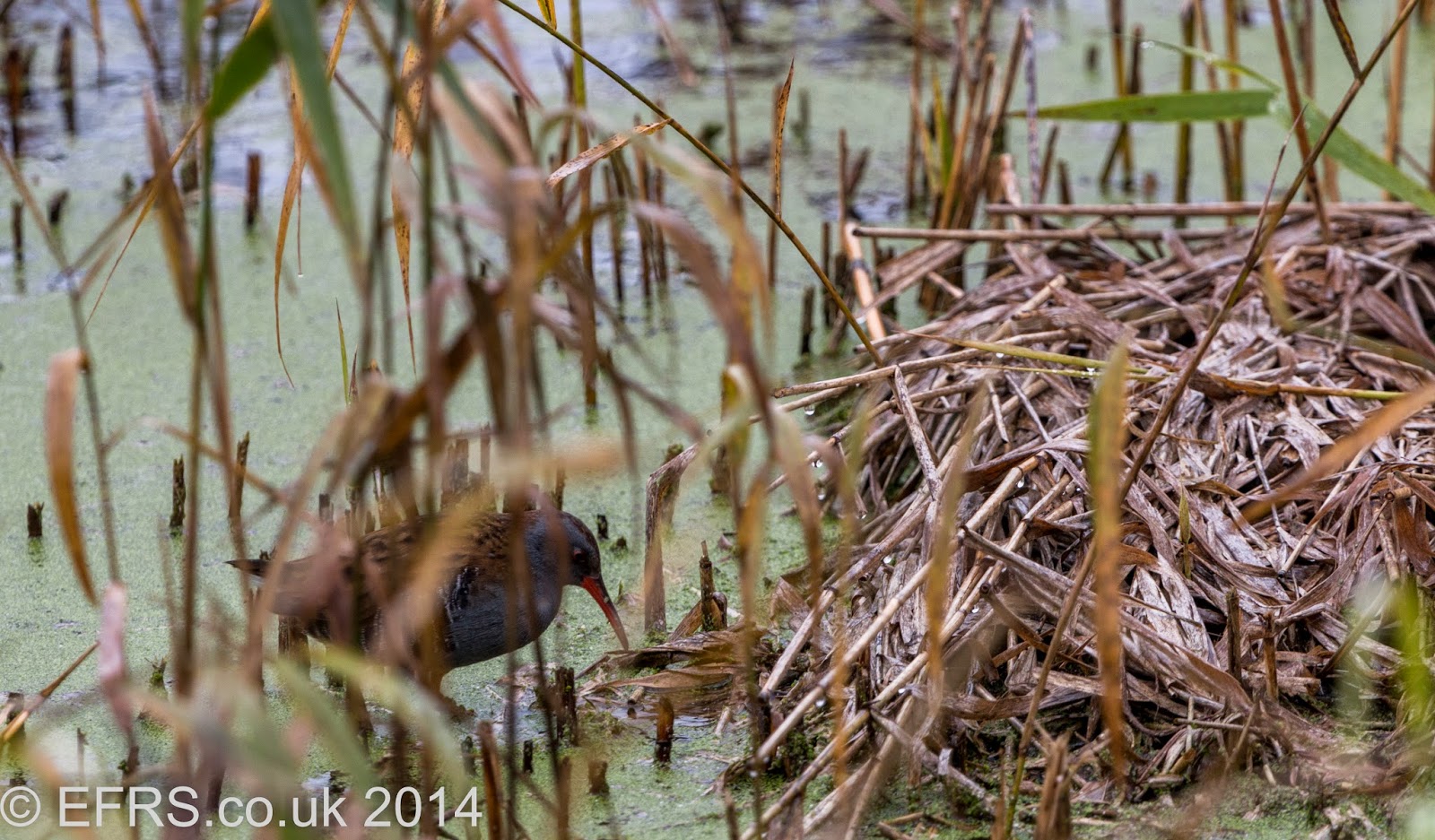 As well as the added interest of the pile of dead reeds there is the mystery of the bird being slightly hidden. 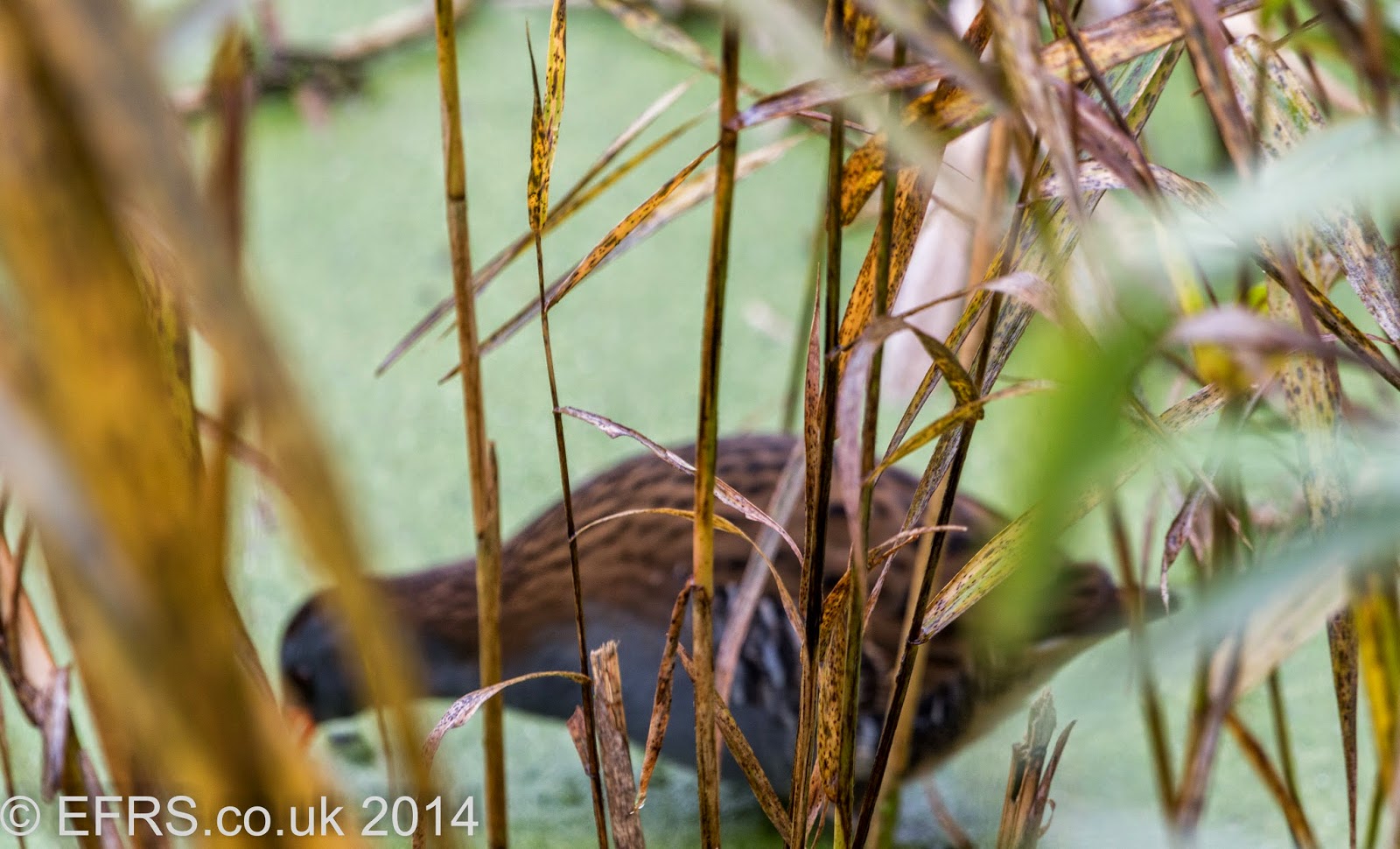 Unintended out of focus (We've all been there) but it does draw your eye to the bird. The Bokeh or out of focus gives a different feel to the bird emphasizing the colours more. 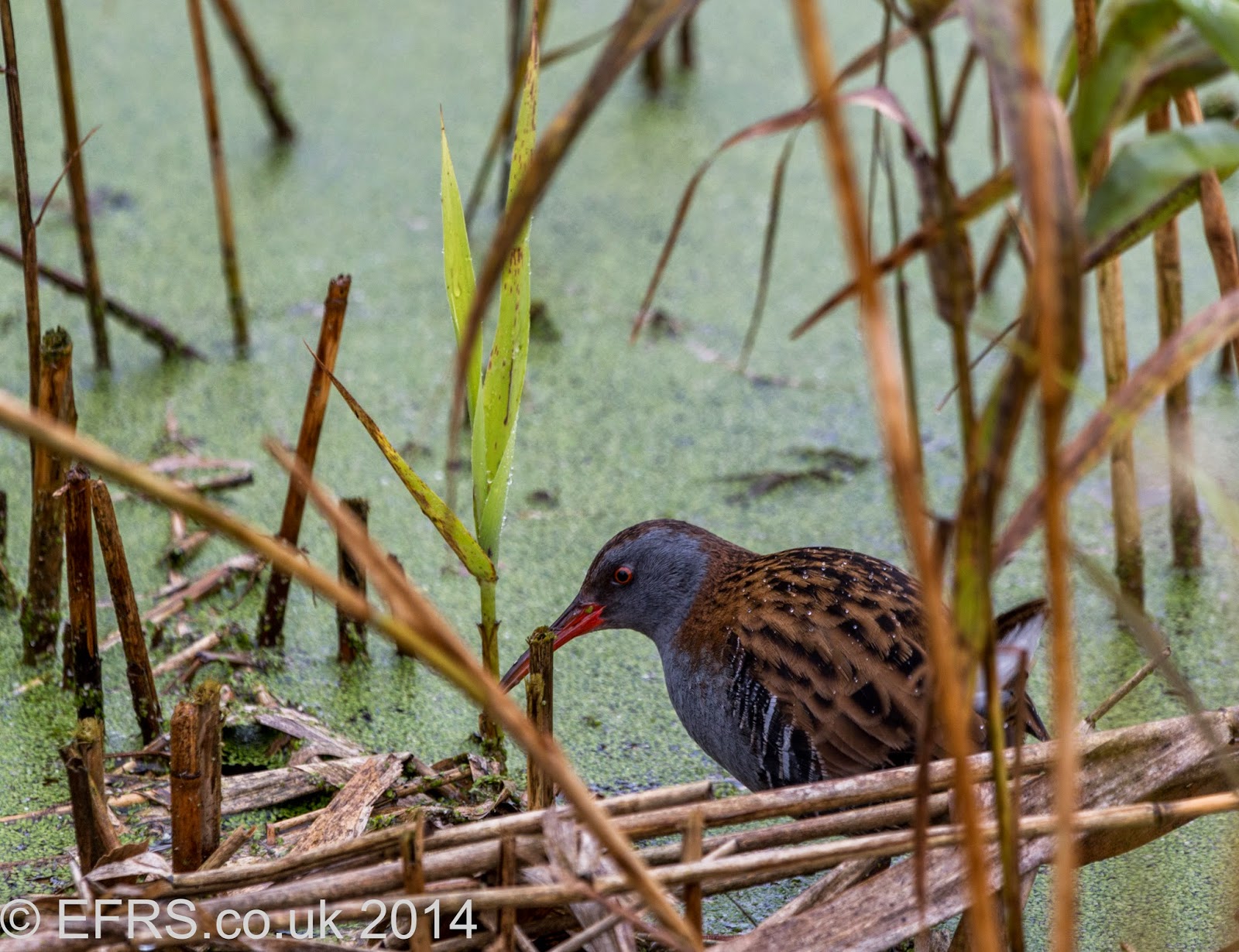 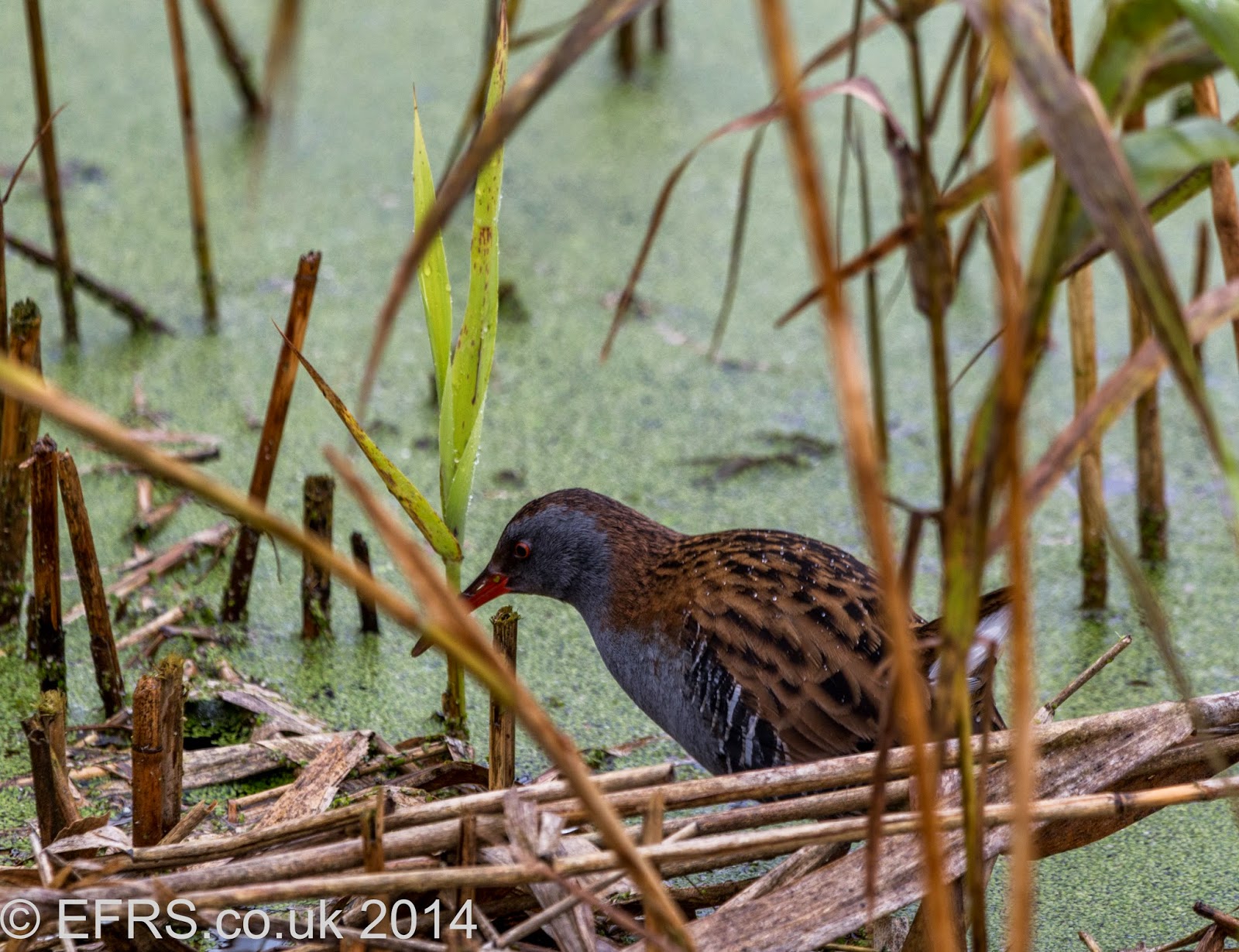 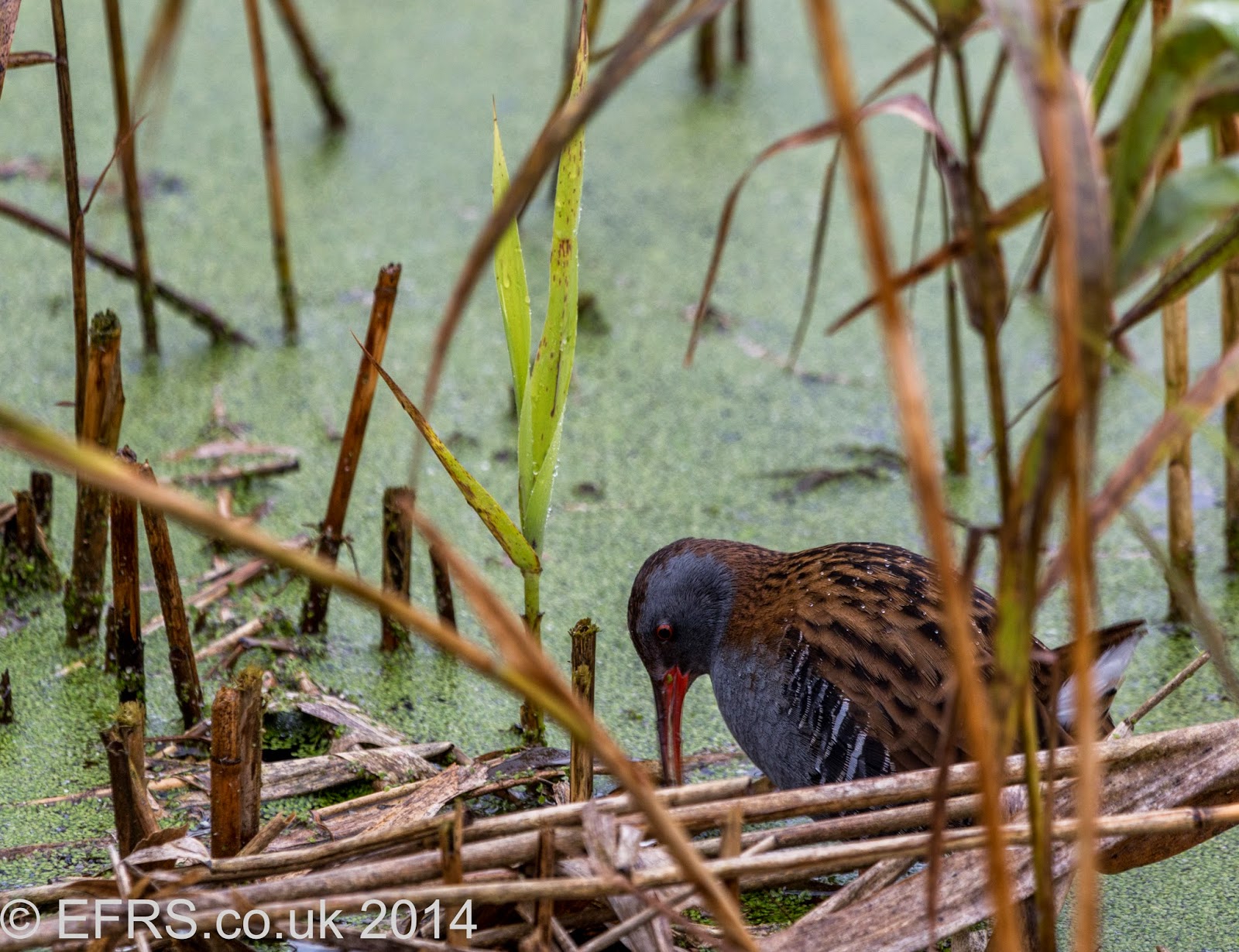 These last three are again adding a little mystery and again its hard to pick a favourite. I think it has to be the last one since there is a bit more action. Its doing something which adds to the context.

So there you have it. A little insight into the way I think about pictures. It was possibly the worst day I've had down at Ham Wall, nothing happening, wet, cold and dark but as always its given me something. Never fails. One more note; its a year to the day that I popped over to Cribbs Causeway and got my Canon SX50 bridge camera. My first use of a camera in over 20 years. Its been fun learning over the last year. Heres to the next year!