Leave it to the Experts

It was going to be a quick one today. James was away down south and the day wasn't looking good. Fancying a bit of company I invited that perennial favourite Mr Riley along for the ride. Greylake was his choice with a quick stint over to see if we could spot the Cranes.

We met at the carpark and headed over to the raised hide. All was quiet. The dabblers were all having a rest, no sign of a Peregrine and only two brief glimpses of a female Marsh Harrier were the raptor contribution. Ok there were lots of ducks to see especially Pochard, Teal and Shovelers but no Tuffties. Even before we got to the hide we were dive bombed by a pair of Snipe. They're everywhere! I was on a mission to get a decent shot of one. You'll see from below how successful I was! Of other note was a calling Bittern, probably the resident pair and a solitary Great White Egret.

Mr Riley had a new toy given for his seventieth birthday. Congrats David. I then had to spend a few minutes sorting his setting out on the shiny new Canon SX420. That took me back to his first week in work with me when I had to show him how to use his computer. Oh happy days! 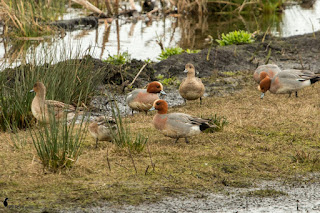 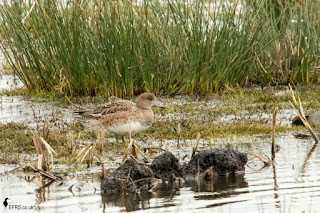 But wait, there was an interesting bird about! Scampering in between the sleeping ducks was a familiar sight. A Red Shank in fact a pair were about all the time we were there. 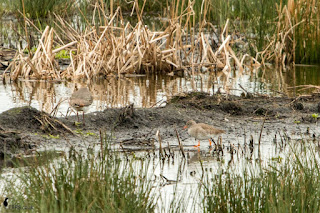 Red Shank a bit far away 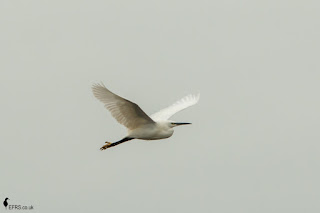 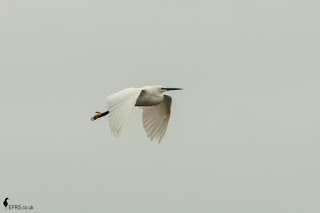 There were footsteps on the board walk..... Mr Riley and I were in casual conversation, as you do, and I payed little attention. As the steps entered I turned and to my surprise it was none other than Robin Morrison. He of exceptional talent and gear and winner of awards and published to boot but probably best known for the inaugural 'A day with' interview post we did a few months ago. It's been a while since seeing him and we caught up a bit. He was there for the Garganey that had been reported. We set off on a mission to find it. That didn't last very long and we were soon back chatting and looking aimlessly about in vain hope. 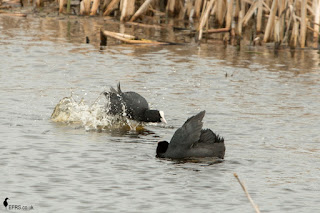 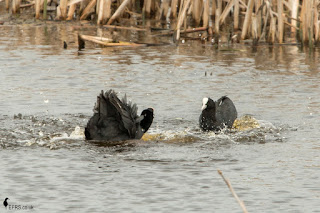 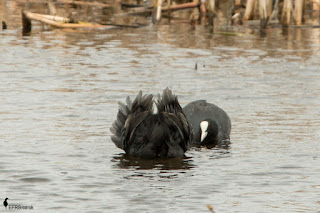 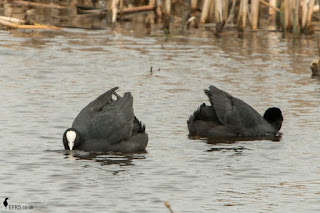 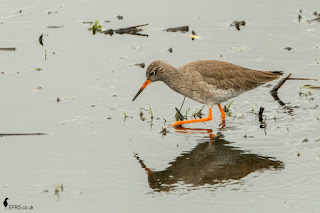 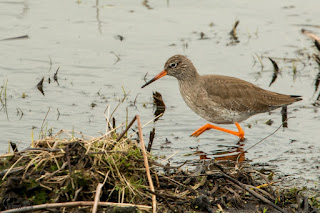 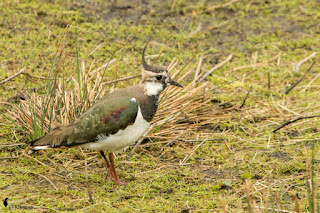 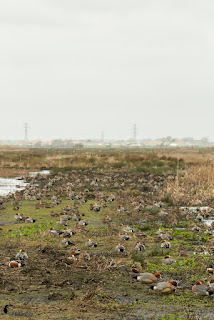 David was insistent that I take this shot. It's from the lower hide.

Robin then gave us a test. An ID of a bird facing awn, hunkered down (As James would say) and only half visible. 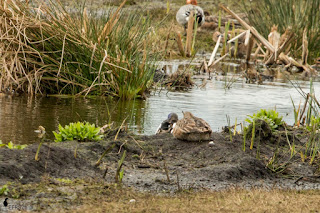 We pondered for a while then quickly came to the conclusion it was a Shoveler as can be seen from the pic below. That was the highlight! 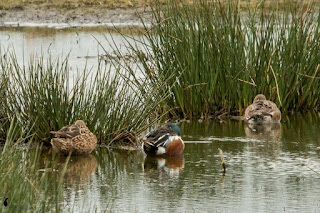 As we all prepared to leave we had another visitor. Quite an esteemed and respected fellow along with his good wife. It was Jeff Hazel. Unfortunately I've never really chatted to him even though I've seen him often around the levels. Our main point of communication was a little spat over Little Bitterns a few years ago but I'm sure all is forgiven. Nevertheless I have the highest regard for him. He knows what he's looking at and has been a prominent member of the SOS for many years. You can find Jeff on Twitter at @levelsbirder. Needless to say a couple of hours later I had a Tweet from Robin saying that Jeff had spotted the Garganey. Best leave this sort of thing to the experts ay!

As for the Snipe? They'll wait for another day. As for the Cranes? The only thing we saw over Aller and Othery way was Robin driving home passed us. Still a good day though. Can't complain. Oh and thank's again for spotting the Garganey Jeff.