In the Dog House!

The EFRS went hi-tech this week but more of that later. I've said it before and I'll say it again..... What a beautiful day it was. It is still a little deceptive though, that sun might be bright but the wind is still keen so its not advisable to venture out in the wilds without a coat. So with James' tee shirt flapping in the breeze we started early and headed off for a full circuit. Whizzing down over the Aqueduct crossing and on to the start of Ham Wall viewing platform 2 gave little to look at so onward to VP1. Again this held little of interest to those who have been there regularly before. (Are we becoming complacent or just turning into grizzled old hands) But now there is the added adventure into the midst of the reeds with the new hide. From there we had excellent views of two Great White Egrets and many Herons skulking around. This is where James managed to capture a close up video of a Little Egret who quit blatantly dropped down right in front of the hide. Are they becoming more accustomed to humans? This would never have happened a few years ago. Even the Great Whites where disinterested in us despite us being within ear shot and definite eye shot of. How times change. There was endless sightings of Hobbies which turned out to be either Buzzards or Crows. The fever had struck.

The rout continued with a brief stop in the company of the esteemed Jeff Hazell otherwise known as The Levels Birder. There was something very interesting in the bushes but we're not allowed to say what. Mums the word I'm afraid. We didn't see it but we did hear it.

We skipped over to Shapwick where we stopped in front of a couple who had fixed their sights on the skies above Noahs. I instantly knew in my blood what they had spotted. Sure enough, high above there were two genuine, 100% Hobbies. Finally we had spotted our first of the season. Joy of joys! As a celebration we had lunch.

From here we ventured to new pastures. At the end of Shapwick we turned left, well actually we turned right and popped down to Eco-Bites for a cuppa and a biscuit. As we munched and supped we heard a call in the sky, jokingly I declared they were Cranes thinking they were either Geese or Swans. They lady in the RSPB next door ran up and declared that four Cranes where circling. The EFRS rushed to action and binoculars were quickly focused on the giants way up high. Along with a fellow birder we watched for some minutes hoping they would head for Catcott but no joy. They soared higher and higher then sailed off as dots. They truly are a wonderful sight even at a distance. Perhaps even more at an enigmatic distance. They are still a tantalizing experience when seen. Its not known if they were wild or the reintroduced.

So, yes, we headed left past Canada Farm and round the corner where the new Hawk and Owl reserve had just opened the week before. Well done to them. Its big, easily accessible and the hide is well placed with views from both side, either to the feeders close up or from the top of the ridge over fields not to mention the Badger hide. This promises to be an excellent place and be assured the EFRS will be visiting it regularly.

Another advantage is the track carries on and links up to the Canada Farm hide. James was keen on getting a Kingfisher or two since we hadn't seen one all day. We were greeted by a very large dog running free and the calls of its owner shouting for it to come to heel. Thats good for nature spotting! The sanctuary of the hide was our only escape. As I approached the door was open. Okey someone is coming out or in? But no, out of the gloom there appeared another very large tan dog, well I say dog it was more of a wolf. Exasperated I went in and came directly out. The dogs had their day there I'm afraid!

Not deterred we sped off down to the Heronry at Tealham. A little quiet but still some nice views of Herons preening, calling and flying in and out. Little Egrets joining them at times. Its a very odd sound they make when they gobble away. I really like Herons, more than the Egrets. At this point I decided to show off my new found filming skills. Tripod out and camera at the ready, I aclimatised myself, no rush just settle down to film a Heron coming in to land. Well, lets just say that the film you are about to see which was taken unbeknownst to me by James has had the sound removed to save delicate ears and my blushes. We would have to but an age restriction on it otherwise. Pride before a fall springs to mind. I did however get a nice video of a White Throat on a wire and a Heron and Little Egret preening on their nests as a conciliation.

The day was done, or was it. On the way back we popped into the Sheppey at Godney for a debrief and pint but despite the door being open, lights on and music playing they were shut apparently! We had to make do with the Who'd a thought it in Glastonbury. Now a year or so before we were sat in just that place having a debrief when two Red Kites flew over. This time we were treated to a Sparrow Hawk being harried by two Crows and two Gulls. Poor thing didn't stand a chance.

Heres the video of our day

Now on to the Hi-tech stuff. I've got yet another bag for my bike. Its a top bag for smart phone and I use it along with a back up power pack to plot our routes. Heres an image so you can see where we've been. It even shows the aborted attempt to go to the Canada Farm hide and the Sheppey pub. Love it. 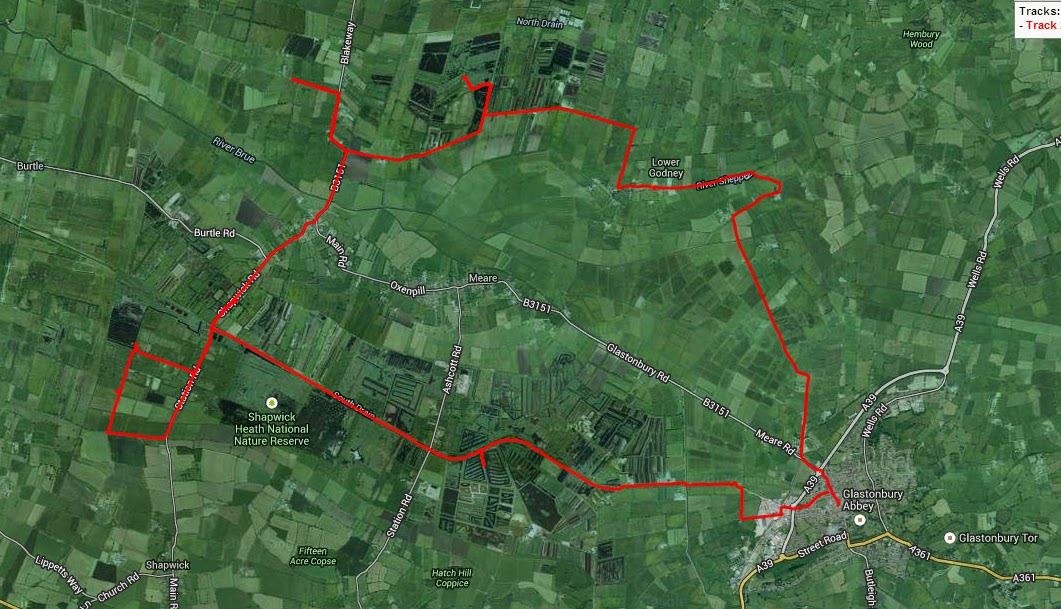