The early bird catches the worm

5:30 am.   Its not a time I see too often, which is fortunate. I found myself wide awake on Saturday morning.  To my surprise the sun was shining in and the birds were happily singing away.  A far cry from those dark and dank winter mornings.  An early morning visit to the levels was in order!

With surprising vigour I was up and ready to go.  I got to the reserve fulling expecting to be the only human about.  Except there were about 10 cars in the car-park already.  Surely the hides wouldn't be full?

I passed by a small house on the left on the way into the reserve.  Camera at the ready (more on this later) I crept closer to the feeders which the owner often puts out.  Half a dozen Goldfinches were munching away along with a much greater prize.  A woodpecker.  Unfortunately in my excitement I raised the camera to quickly.  The movement caught the bird's eye and in a flurry of pied feathers he was gone.

Into the reserve.  My senses were quite overwhelmed.  The birds act differently in the morning.  They seem happier!  A Chiff-Chaff boldly announced his presence on an overhead wire.  Goldfinches sang their twinkly song and Cettis were filling the air with that short, explosive tune.

Then something started up which I hadn't heard before.  Loud and proud and rather nice to listen to.

A lone, Lycra clad  cyclist looked slightly bemused as I stood staring at a hedge and stare I did.  For a good 5 minutes, trying to locate the owner of the powerful song.  Then without warning it jumped out right in front of me.  I took half a dozen shots, the camera whirring and complaining as I strained its (rather slow) auto focus.  Moments later the bird had returned back into the foliage.

As I took the photos I noted a ruddy coloured tail.  I fast becme aware that this was something a bit different from the norm... A Nightingale.

Flushed with pride I examined the photos.  That when an upwelling of dissapointment set in.  I had set the camera to a a shutter speed approaching that of a Cheetah on steroids.  Way too fast.  I eneded up with a black blob perched an a thin, dark twig.

The Nightingale continued its harmonious song from deep in the thicket.  I cursed.  Things went from bad to worse when a psychotic blackbird arrived on the scene.  It gazed down upon me all wide eyed and twitchy.  I knew what was going to happen... Sure enough it belted out an hysterical warning cry.

The Nightingale fell silent.  Happy in the knowledge that it had ruined my morning the Blackbird flew off down the path. Cackling manically.

Dejected I stayed for a few more minutes.  It was no use.  The Nightgale had fallen silent.  I picked up my bag when suddenly he started up again.  Perhaps he had grown used to the Blackbirds frenzied chorus and had learned to ignore it!

Finally I located the songster amongst the leaves...

A first for me and the EFRS!

I stayed for about 5 minutes before he went to far in to the hedge to be seen any longer.

At the hide, there was plenty of heron activity.  Plus a Kingfisher landed on a distant reed with a hapless stickleback in his bill.  I did get a picture but was awful.

As I was the only one there the birds seemed a bit more bold with the Pochards and a Little grebe coming quite close. 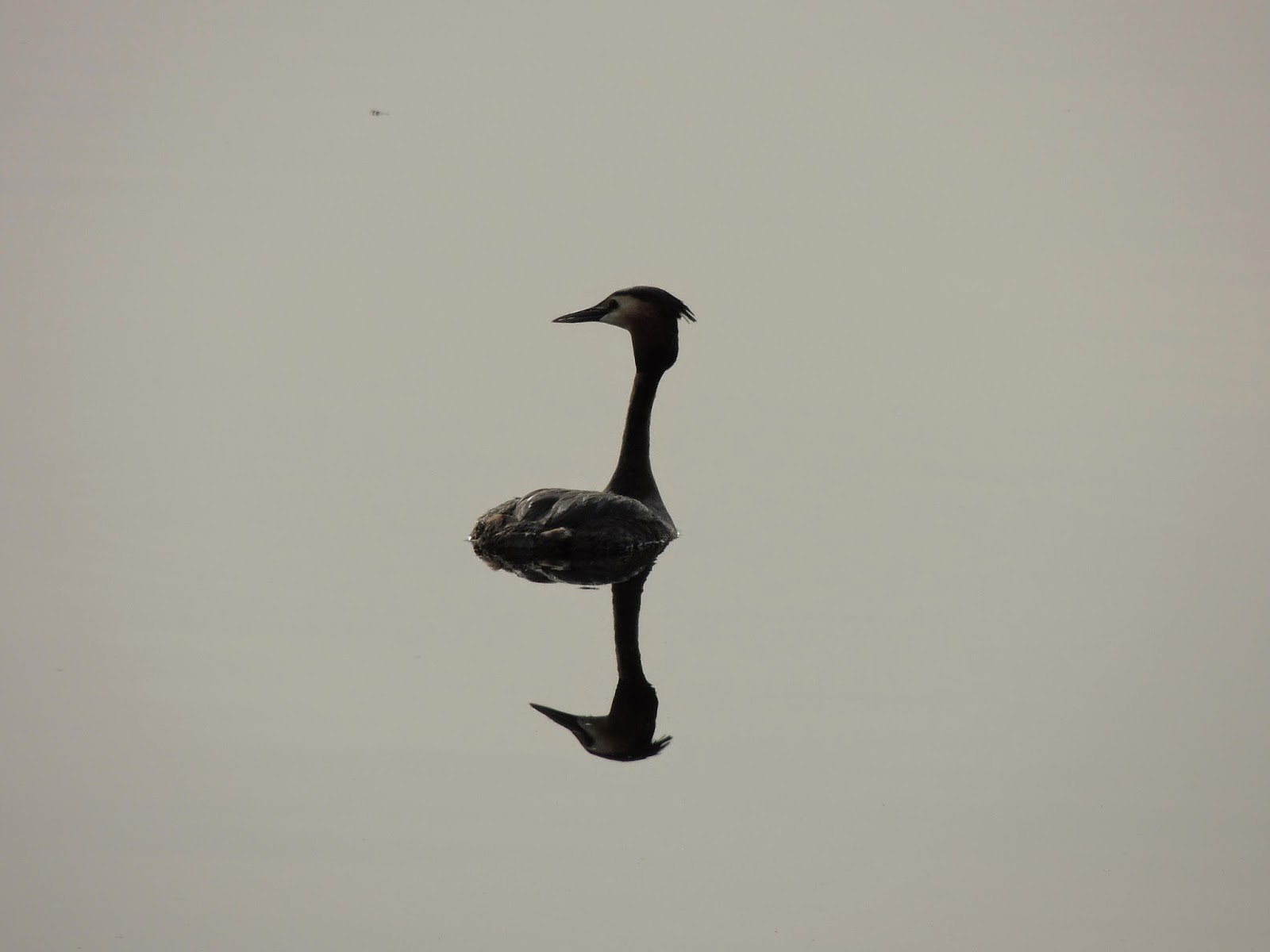 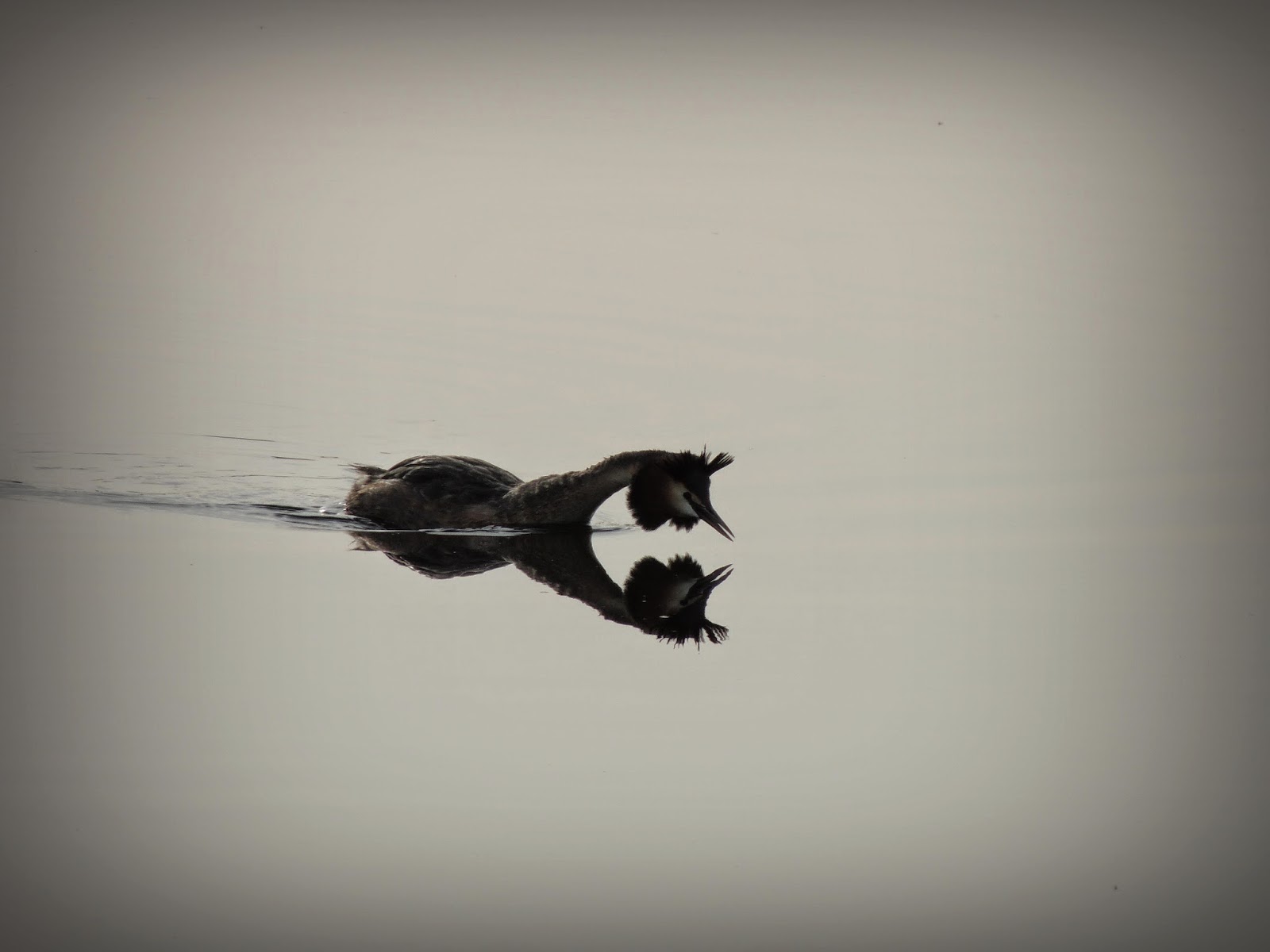 Despite the tranquility, my mind was slightly occupied with thoughts about cameras.  This was going to be my Nikon's last outing before I bought an SLR.  I have had a slightly long and boring relationship with various cameras, SLR or otherwise and can never make up my mind.

Back home the winning buyer on ebay was emailing me enthusiastically about  when I was sending it and what condition it was in.  Meanwhile, the SLR I was bidding on seemed a bit less tempting (200mm lens doesn't get you all that far...)

In a fit of decisiveness I issued a full refund and the Nikon survived another day.  I'm glad I took it with me as its final early bird outing has proven to be one of its best.