Retro is the cool thing to be these days.  Indeed it has sparked off a newer breed of human, the "hipster".


Sadly I'm not cool enough to be hipster.  But I can do some retro (please visit the EFRS sister site for retro cool.   Now after that shameless plug  I'm going to say something controversial...

Retro isn't always good.  Often our memories of the past are rose tinted and slightly dewy eyed.

I recently revisited my favourite early childhood game.  Gorf.  I remember the evil space ships slipping across the screen whilst I frantically tried to blast them before they blew me into a thousand pixel pieces...

Now, in 2016... Its bloody awful.  Chunks of gaudy colour blob across the screen with sound effects that sound like a toddler banging a baked bean tin.

Some things shouldn't be revisited.  Allow then to gracefully ease themselves away into our memory.  Forever immortalised and remembered with love.  I'm certainly not going back to Mario Bros...

Now, a good 6 years ago I was walking around with my Canon Powershot SX20.  One fateful evening I happened to be at Ham Wall as the starlings came in.  I just happened to be in the right spot at the right time.  It was incredible.  The birds twisted and turned, thousands, all in unison.

I did get some photos and I did revisit them today.  A risky thing to do, but I was pleasantly surprised.  Sure they are not great quality but boy those birds did throw some great shapes.  If you are interested in my vintage site please feel free to visit:

Link to my old retro site

Anyway, since that fateful day I have seen the starlings many times but its never quite matched up.

This year I have been a few times but they were not playing ball.  Straight in, no displays, no messing.  Sadly this isn't always the best for us avid starling watchers.

Today there was even more pressure as the family was coming along.  I envisaged tiny pin pricks, about a mile away diving down into the reeds.  Disappointment etched on faces...

I tweeted the man in the know.  Lee Dutton.  He recommended the Shapwick end.  So that's where we went.

Despite my daughters jet engine like voice, there were a few birds about the place, flapping and perching in the gloomy conditions 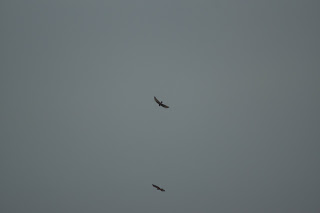 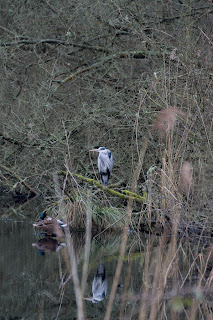 Grumpy heron sitting in the murk

The light was fading rapidly, Soph my daughter was having great fun running about on the bridge and couldnt care less whether their were Starlings or not.

Then, it happened a vast ball flew right over our heads.  Even Soph stopped (and getting a 4 year old to stop is tough).  We all simply watched.  I didnt even take a picture, I just enjoyed the moment.  The right time, the right place.

They slowly swept out across Noahs and performed a small display.  Distantly now.  It didnt really matter.  To have the shear number of birds right above you is amazing and something which hasnt really happened for me this year at all.

But it wasn't over... A second giant mass of birds began to form across Meare haeth.  The chattering from their beaks was clearly audible.  Some had settled already.  Turning the reeds black with the sheer number of feathered bodies.

I hit the record button :-)

Darkness had almost completely surrounded us, but the birds wouldnt settle and were still slipping around the reeds like a giant, black serpent.  When I left they had snaked right up to the edge of the canal.  A sight and sound to behold.

Was it up there with 6 years ago?  Possibly not quite that good.  But it was a great evening and one which I will hopefully revisit with fondness.