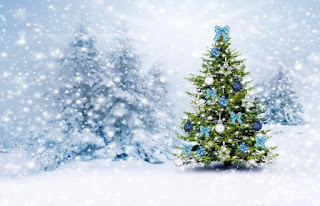 Christmas.  A time of year I rather enjoy.  Its a great excuse to eat loads and drink even more.  Of course such wanton excess causes hangovers and an increased waistline capacity.

The ideal cure is of course a stroll round the classic EFRS haunt of Ham Wall.  This morning it was doing its best to be a backdrop for some cheesy horror film with thick mist hanging in the air and Water Rails squealing like victims of Jason Vorhees.

I met up with Andrew at VP1 (late, as I had to get the ice off my windscreen using an assortment of credit cards, my sleeve and a kettle). 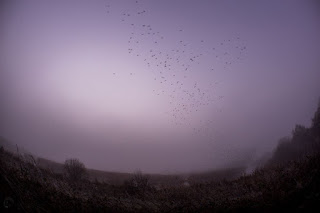 Andrew - Before James arrived I just managed to get the last of the Starlings!

The fog was hampering chances of seeing anything but I kind of liked the atmosphere.  We always worry too much about getting the perfect shot of a bird, bemoaning the lack of light or whatever but over recent months I have become much less concerned by this and enjoy taking photo's even when the weather is bad.  It gives a slightly different feel to things.

I dont care if I cant quite see a Blue Tits upper primaries in ultra resolution, HD, 4K ness.  Just to be there are getting a picture is fine for me.  Simply enjoying the moment.

After seeing very little we wandered around Waltons.  Plenty of birds were gathering on the lake. 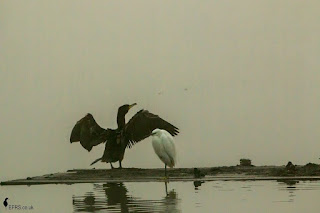 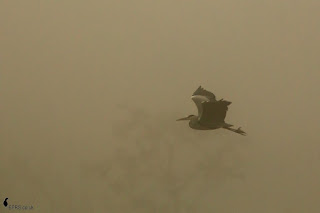 Grey heron in the gloom 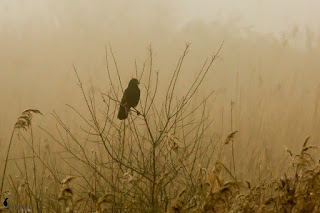 After a bitof a trudge and a chat we headed to VP2.  Here we found some good stuff.  Behind us were 6 big Egrets.  It may not have snowed the Christmas but there was plenty of white stuff here!

I chased the Great Whites around for a bit, until my hands started to freeze.  At which point I gave up.  But not before getting a couple of misty pictures. 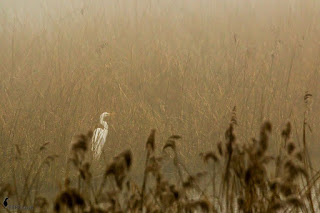 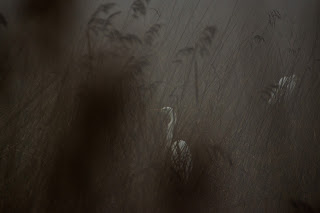 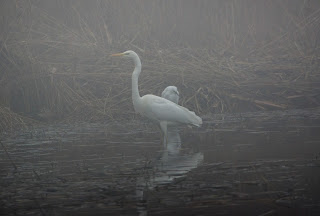 Our final destination was the new hide (tower?).  Here I got to see the dismembered bits of bird and a lot of bird s---.  Whoever uses this place probably needs to get some pro biotics to sort themselves out.

Luckily there were a few ducks milling about.  A shoveller drifted in quite close along with some smart Gadwalls. 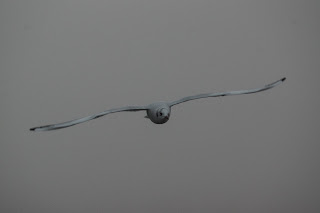 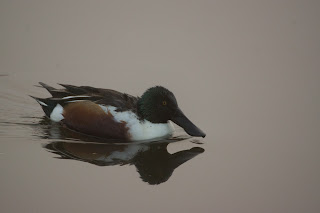 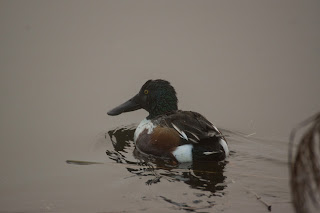 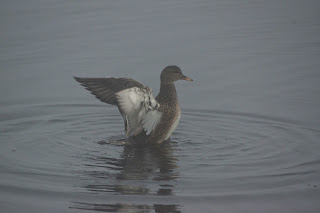 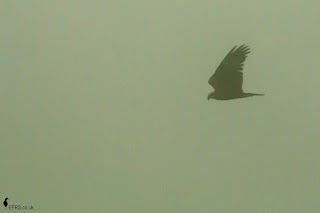 Through the fog a Marsh harrier flew lazily by.  By this point we were both feeling the cold a bit and headed back to VP1.  Here we were joined by a most friendly Robin.  Andrew was keen to get it to land on his mitten.  Fortunately I had some left over Wotsits.  A slight sprinkle and Andrew stood with arm outstretched.  The Robin wasn’t having any of it and simply hopped passed him… 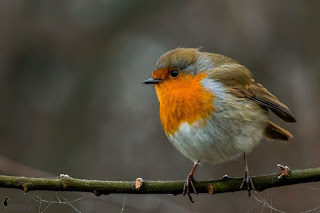 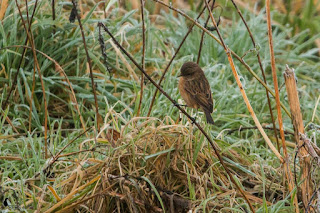 Not giving up Andrew thought he would try again.  Rather amusingly our clever little friend and positioned himself behind Andrew, who was somewhat startled when he turned round to see the little chap staring at him intently.  If Andrew was a worm he would have been snaffled in moments.

Anyway the whole experience of the sneaky Robin put him off doing any more feeding.

Despite the fog and cold it has been a good morning.  Most importantly we did get our Great White Christmas.