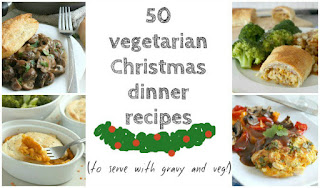 
I had a call out of the blue from good old dear Mr Riley. Not sure if it was a 'I'm still alive by the way' sort of call or not but non the less he was and we made a date for a wander round Shapwick etc. He was parking on the verge at the far end of Shapwick since he had 'lost' his RSPB membership card (Member for 40 odd years my arse!). I on the other hand being a fine upstanding fully payed up and more to the point card carrying member of almost a full year now was parking in the executive designated area with tea and coffee facilities.
We agreed (I told him) to meet at the old gypsy caravan (Tower Hide) by the scrape at Shapwick. How difficult could that be! Just keep walking, no diversions just keep walk straight as a railway line..... literally! I still got a phone call for directions and he was on the path!! He's been there hundreds of times. I could see him coming for half a mile. Standing there on the platform beneath the hide in full view. It's a bloody great wooden hide on stilts that you walk within feet of. Still I watched him and he walked closer and closer. I got my hand ready to shake his and ................... he walked straight passed! I mean I was within feet of him on a platform beneath a huge shed on legs! I just watched. He walked passed me like it was a public convenience he looked neither left nor right. He appeared to have taken my instructions of 'just keep walking' a little too literally. It was hilarious I with I had video'd it. A large 'AHEM' should do it. Nope he was still strolling along. 'DAVID' did the trick and he wheeled round in startled amazement at the monolith and accompanying human.

We got on with the day.

We stayed at the Scrape for a while with nothing to show. The views over the back were wonderful. It was a true golden day one of those perfect days with cold crisp frost still glistening in the shadows, pale blue sky with only a hint of wispy cloud and a stillness in the cold. Perfect. Leaving aside the Bittern that flew briefly before David arrived there was nothing of interest so we moved on to somewhere the EFRS rarely venture, Noahs Hide. 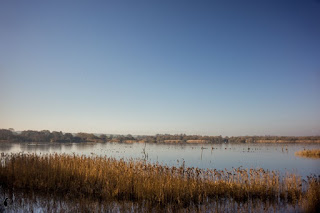 View from the hide over Noahs Lake 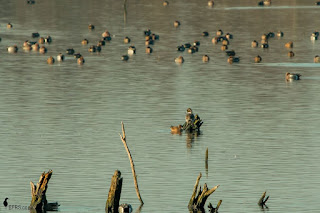 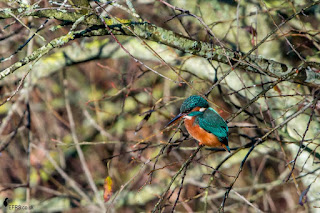 In total we had three Kingfishers. This one stayed with the occasional fishing dive for our entire stay 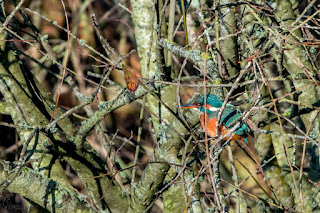 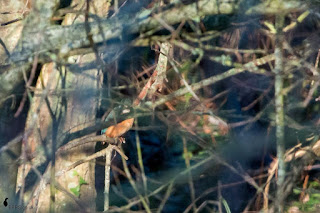 Probably his mate who went further in but he didn't seem bothered. 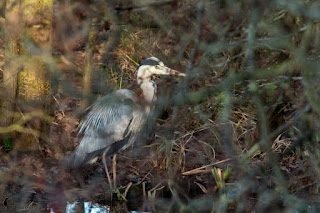 Getting in on the act was a rather nice Grey Heron 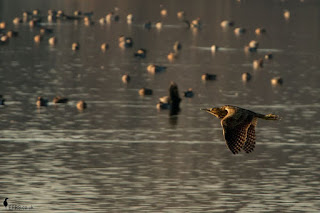 We discussed how often you see Water Rails and when we last saw one. It was in fact last year when we had last been out together and I had spotted it. David has been eternally grateful ever since. So what should wander out of the reeds in front of the hide and who should spot it? 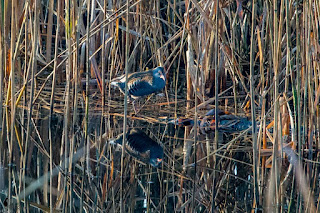 I suppose I'll have to be eternally grateful 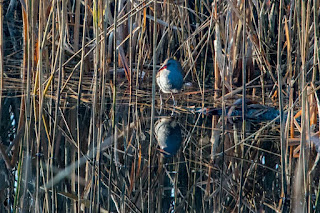 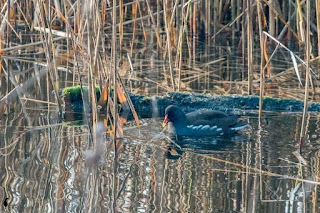 And a bonus Moorhen (Which you don't see very often these days.)

The lake had quite a good showing of mostly Wigeon with a few others of the usual thrown in such as Gadwall and Pintail but other years have seen more. Is it too warm? It certainly isn't too early. Reports have stated that migration time has increased by over three weeks since the sixties. Are they going further north? Or am I getting it all wrong and the rest will be here next week.

Another guy getting in on the act was this Cormorant popping in and having a good swim for fish along with the Grey Heron and three Kingfishers. Not a time to be a sprat! 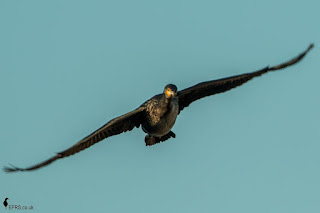 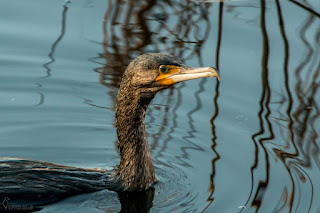 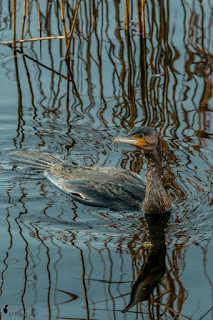 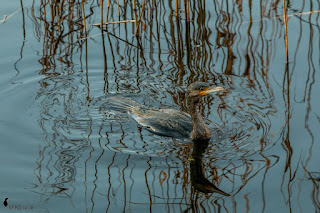 They always look like they've just come out of an oil slick. That black water doesn't help either 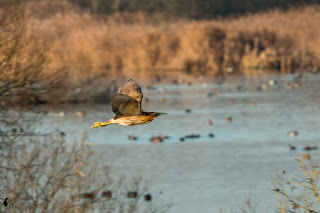 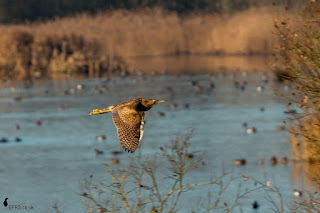 Time to move on. David hadn't seen the new Avalon Hide at Hamwall so he was in for a treat. Last time the EFRS we're there it had distinct signs of habitation of the feathered kind in the form of lots of droppings and we're not talking reed buntings. This time it was a bit of a butchers shop with wings and feathers and bits of bird everywhere. A small sign stated that it was from one of the local Barn Owls using it as a midnight feeding station. David pointed out that he was surprised at that since Barn Owls tend to catch small mammals and was more likely to be a Tawny Owl. I'm going for David to be honest.

Anyway we settled down and got cracking. We we would have if there was anything to get our teeth into. Highlight was a family of three Marsh Harriers Male, Female and what looked like a juvenile Male were far off at the back. The Juvenile settled down on a bush which I've often seen them in while the female wandered around mostly trying to get it to fly up again. Lazy teenagers I suppose. The disapeared probably down the pub with his mates leaving mother to deal with junior. 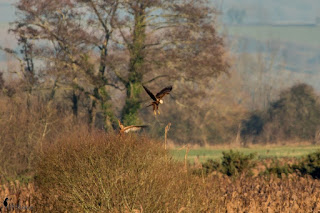 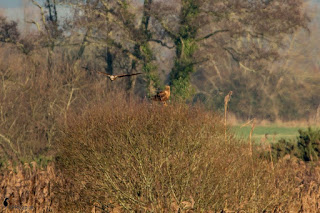 David was getting agitated. To be honest I was to. There were far too many people for our liking. The answer was to take a lovely wander around the Walton Heath trail. Often overlooked by the casual visitor this is a beauty of an area with long wide swaths of mirrored waters between the golden reeds. Worth the extra while to wander. 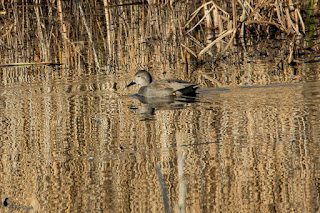 Gadwall in the shimmering waters 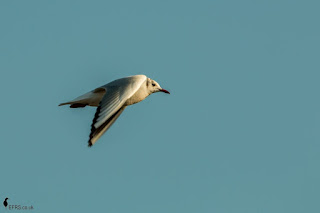 As we returned parallel to the main track I saw a Cormorant gliding in as they do. But wait this one looked a little different. As it landed I knew what it was. One of the Glossy Ibis that seem to have decided to make Hamwall their home. I moved closer and managed to get the best shots I've got so far. 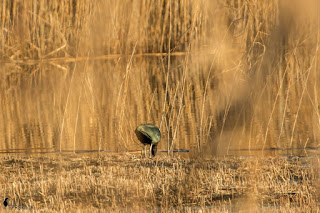 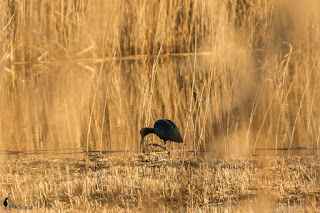 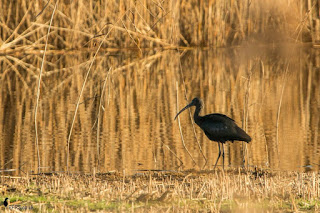 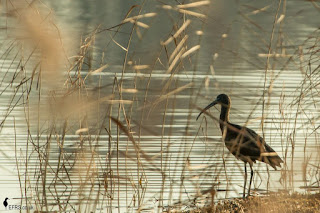 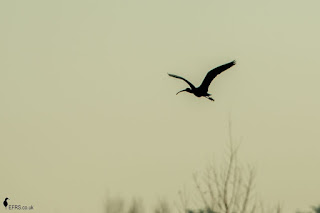 And with that it was off

So will we be hearing the patter of tiny Ibis feet next year? Fingers crossed.

It was an excellent day with a far too infrequent companion. I didn't have high hopes but things turned out pretty good in the end. A veritable feast of feathered stuff. You could say we had it with all the trimmings. You'll be seeing more of David next year I promise.

HAPPY CHRISTMAS AND NEW YEAR FROM THE EFRS