Steart has still got me buzzing at the moment.  Its all this flooding and new hide business thats doing it.

I plodded along the river Parrett admiring the weak hot chocolate colour of the incoming water.

The usual flocks of gulls milled about and a few Little Egrets were hunting intently along the slippery shore.

I took a left and had a wander along the new pathways.  Its all very civil (ideal for EFRS bikes actually).

Suddenly a streak of white flashed right in front of my nose.  A Wheatear.  These are great little birds.  I carefully stalked him and managed this. 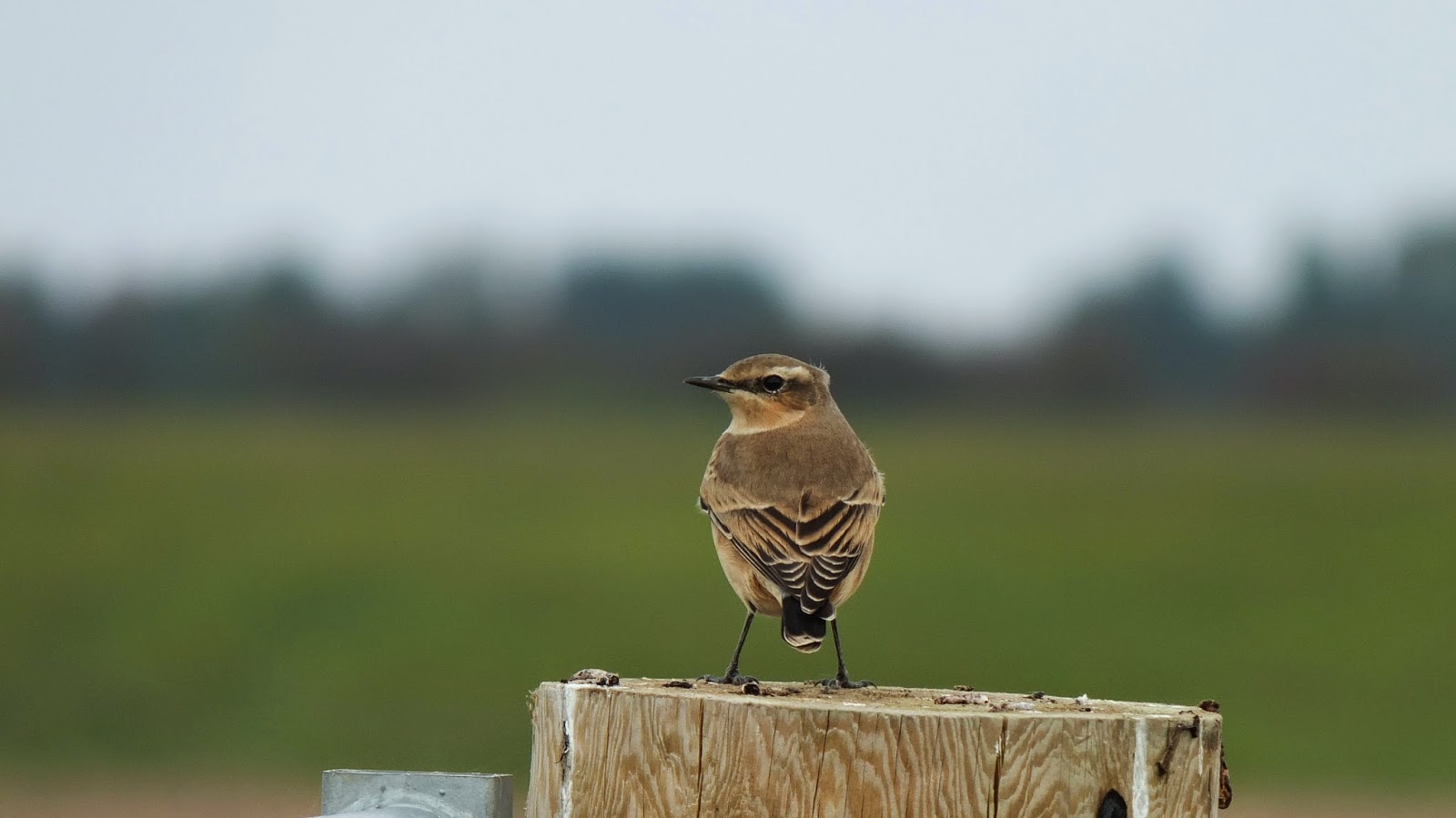 Only then did I realise there was more than one.  A flock! 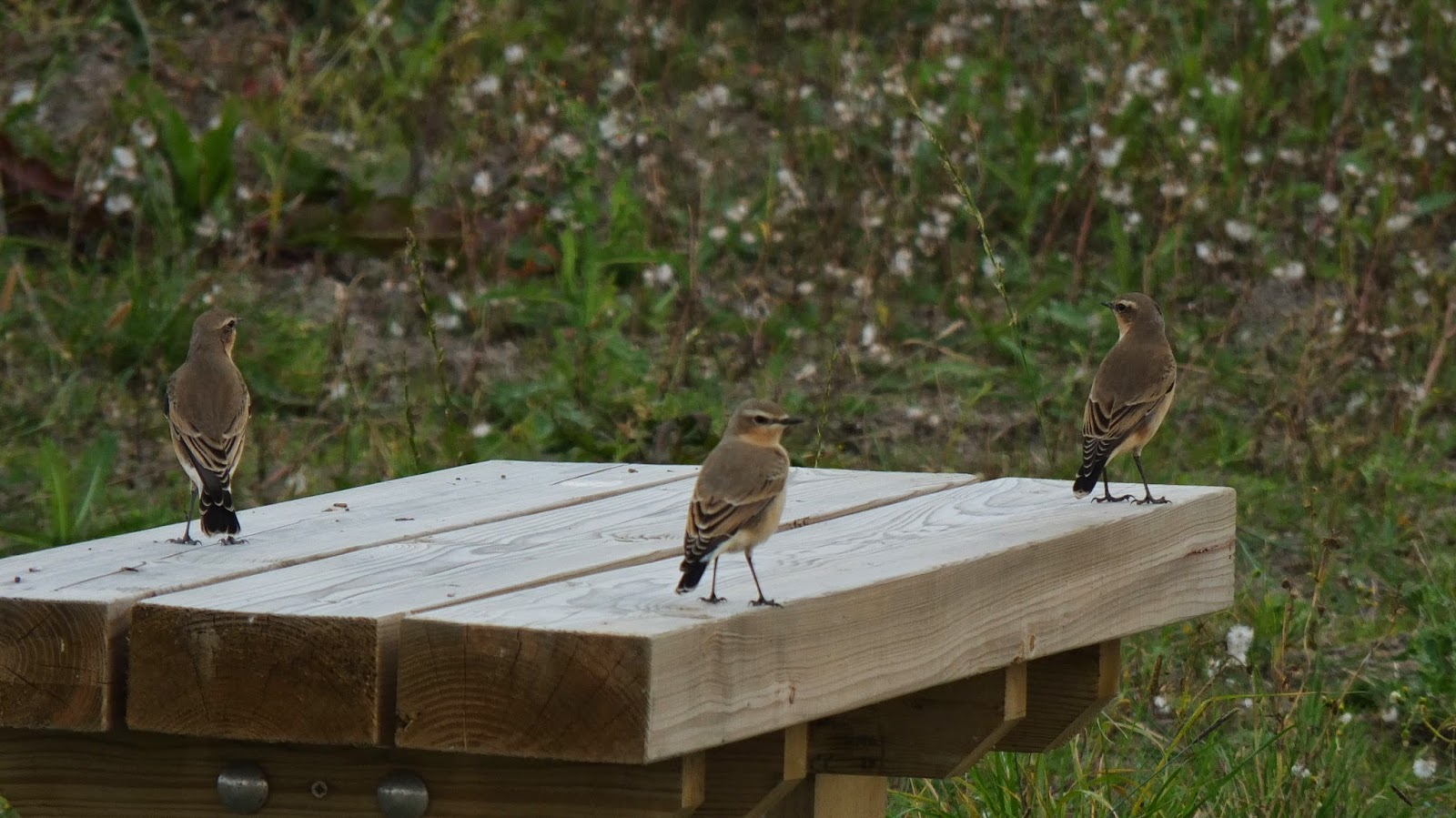 These fellas were quite friendly and seemed quite unconcerned by my prescence.  I wanted to get REALLY close.  I sat down and looked as unnassuming as possible.  I dont really have a scary, mean persona so I figured that the Wheatears might just ignore me.  It was going well.  They were looking about and even catching some critters on the ground.

Then something bad happened.  A dog plus accompanying handlers came trotting down the path.  I acted quickly.  I fired off a load of shots and got this one. 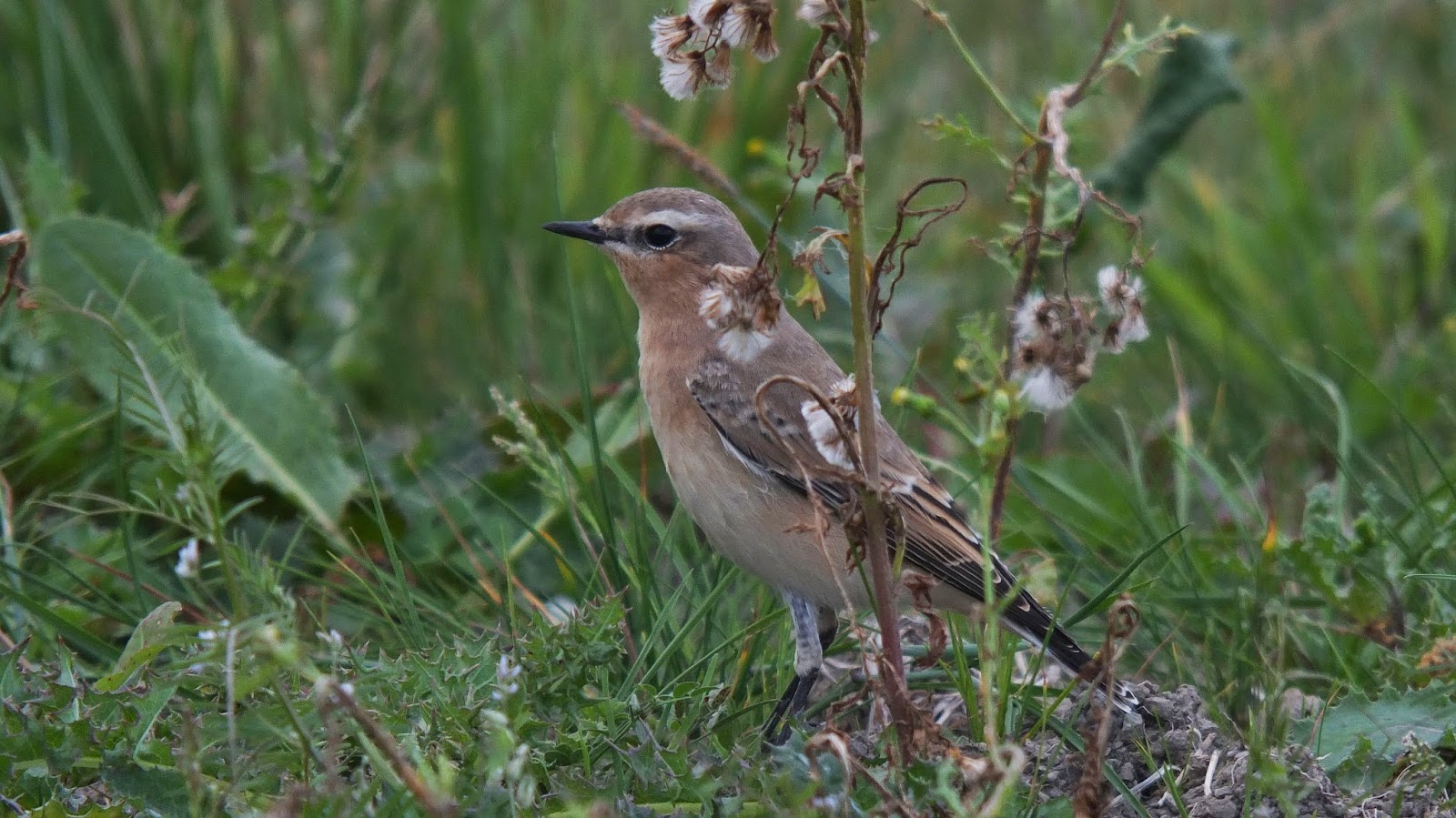 and one more for luck. 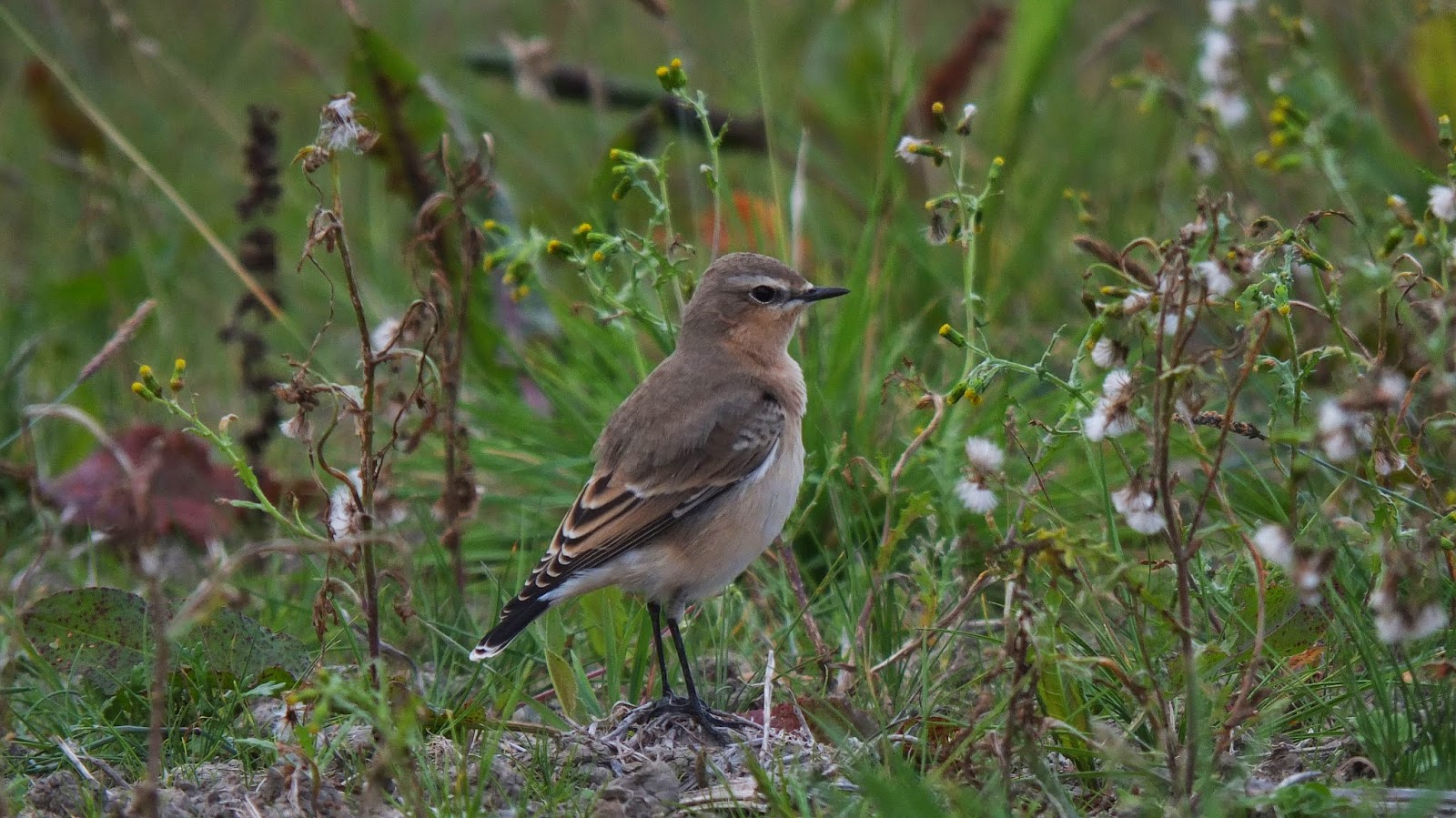 Unfortunately the light was terrible but then you cant have everything.  Sure enough the dog came snuffling along.  The Wheatears flew to the other other side of Steart.

"They are Wheatears?" one of them said cheerily

"They WERE".  It was a short conversation.

Disclaimer: I have nothing against dogs or their owners.  But I do have a problem with inconsiderate people.

I had a look in one of the hides.  Bit posh and very modern.  All fresh and new. 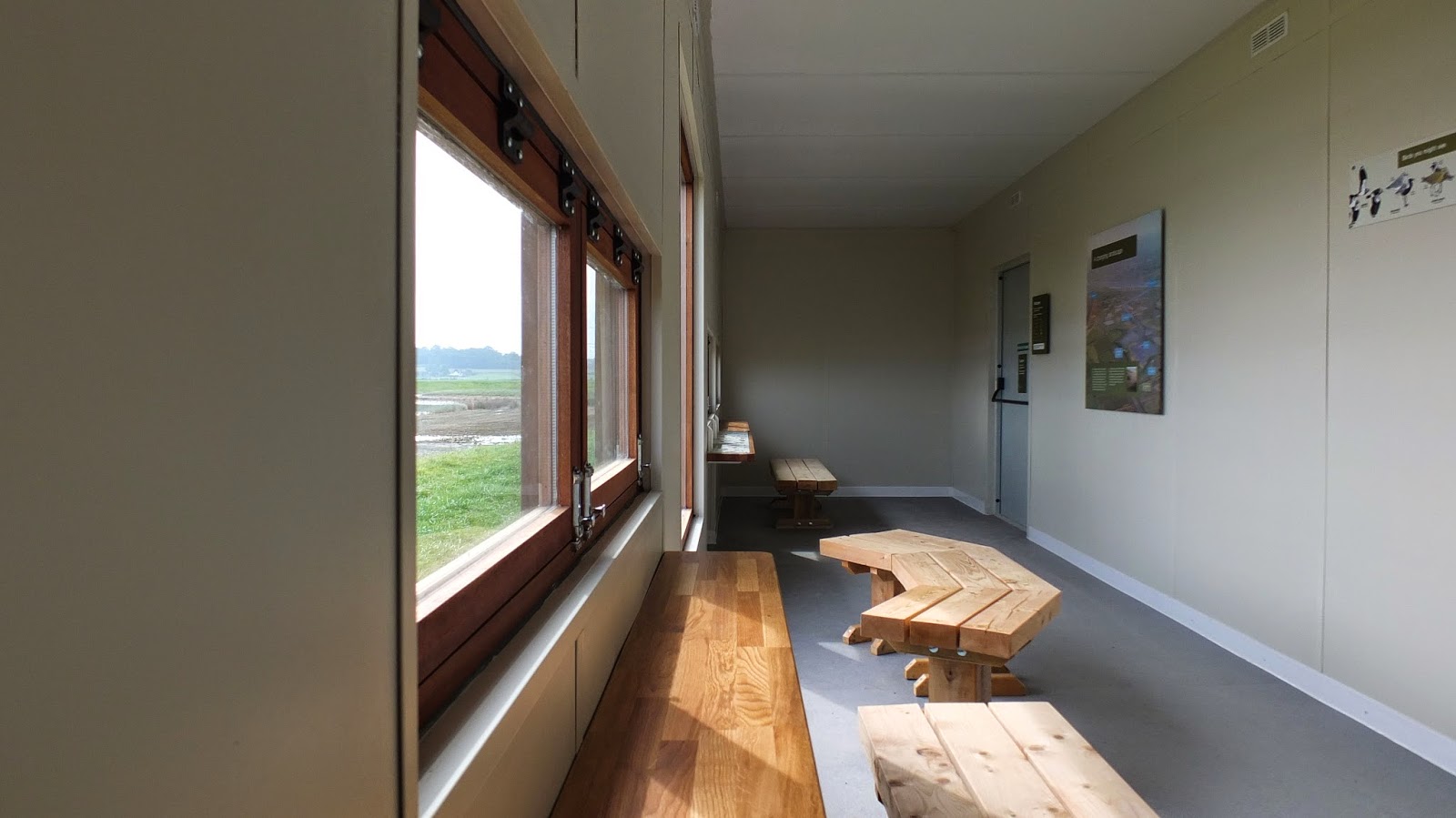 I looked out toward the flooded plain.  A very distant bird of prey was flying low and fast over the flooded field.  It rose sharply before descending and repeating the process.  I am not sure what it was if I'm honest.  Right at that moment I yearned for a scope.  I sold mine a few weeks ago due to excess weight (the scope, not me).

The next few evenings will no doubt involve numerous visits to a well known online auction site...

Luckily a GWE did just about come within Bin range. 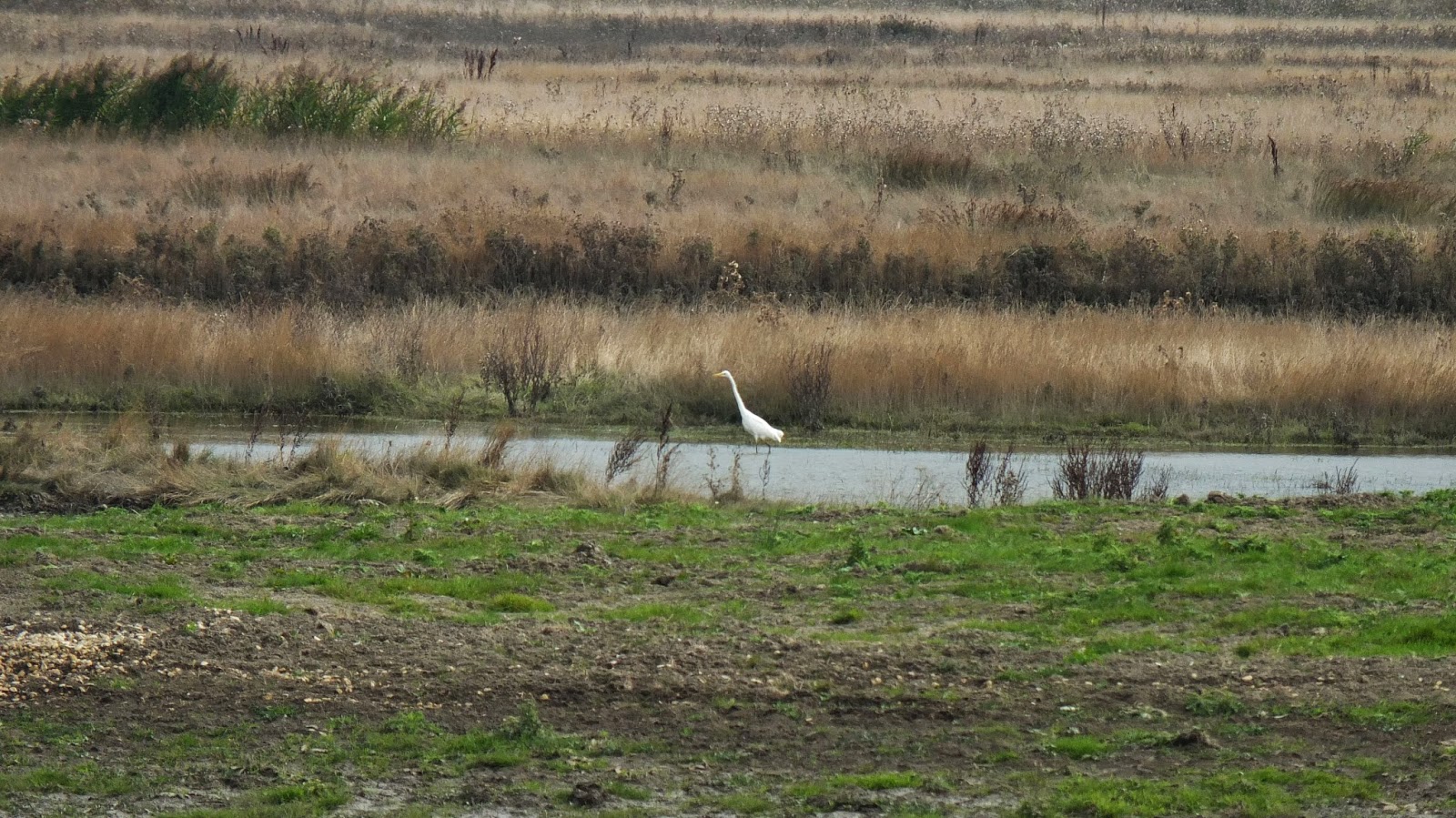 Outside the hide I met the most stupid caterpillar in the world. 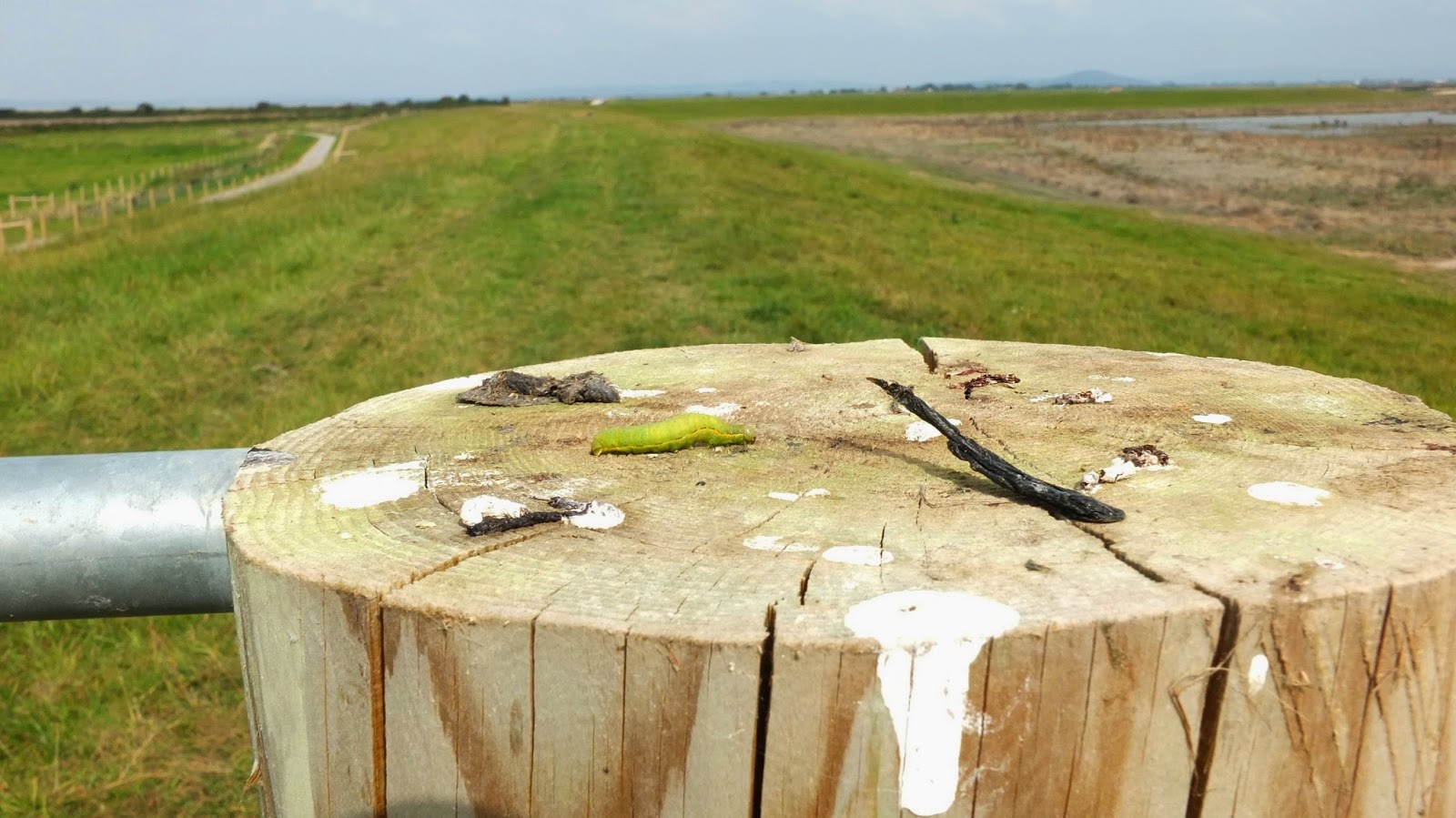 In the air there was lots going on with 5 Kestrels flying about.  One of them starting picking on a Buzzard 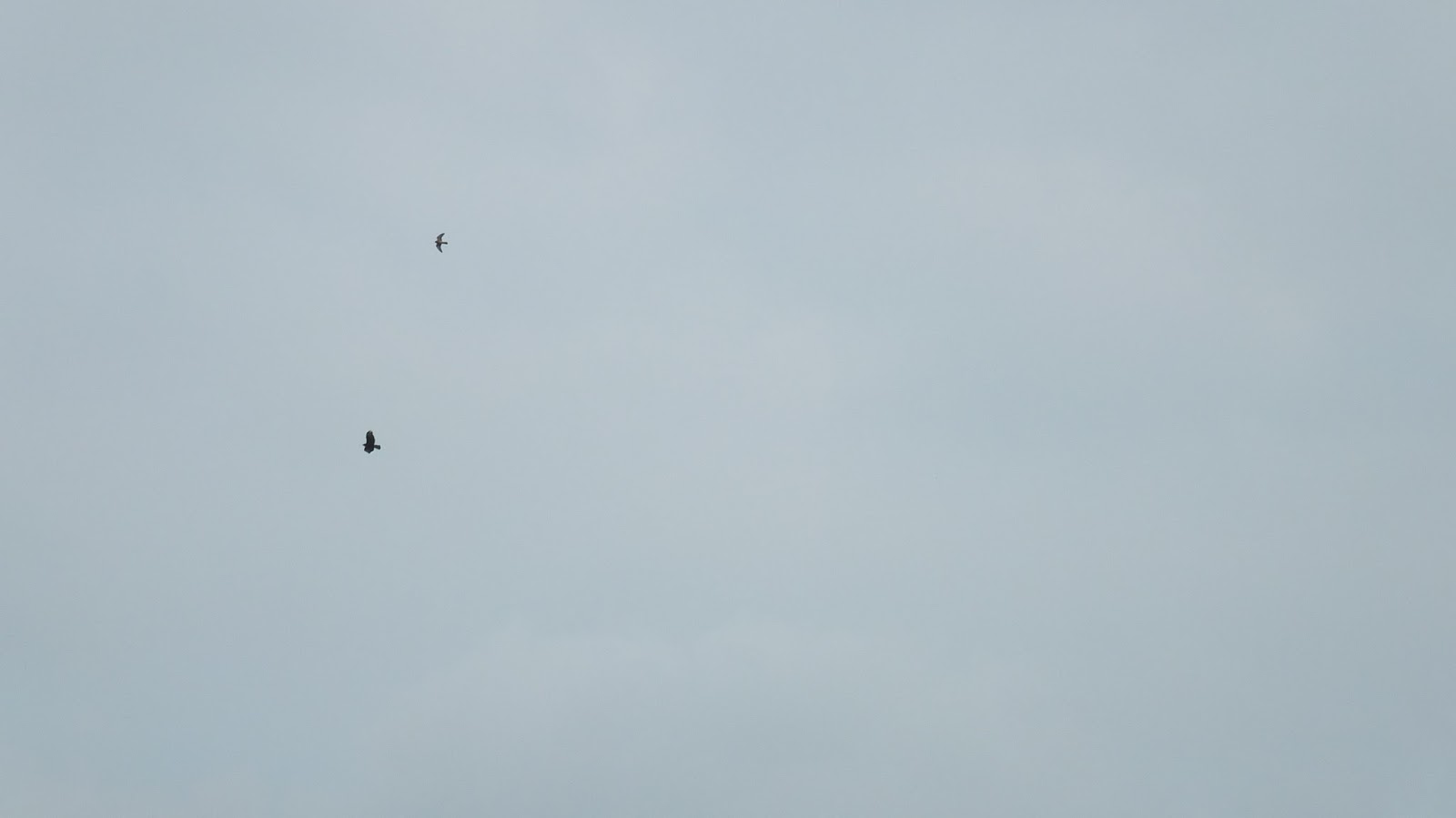 He slapped him all over the place.

As I was watching the Buzzard getting a good hiding.  I noticed another dark shape. Angular and fast.  Peregrine.  My viewing experience was hampered by me deciding to video the aformentioned bird.  The focus wasnt up to the task and the video is essentailly a black fluffy blob flying against a greyish background.  It wont be narrated by David Attenborough any time soon.

My 4th bird of prey was a female Sparrowhawk flying low across the marshes, with a steady flap, flap, glide motion.  Excellent!

Time was getting on so I marched back resisting the temptation to go on  a well known internet auction site (phones, the bane of humanity).

Back near the car I thought I had found a real life Star Wars Wookie... 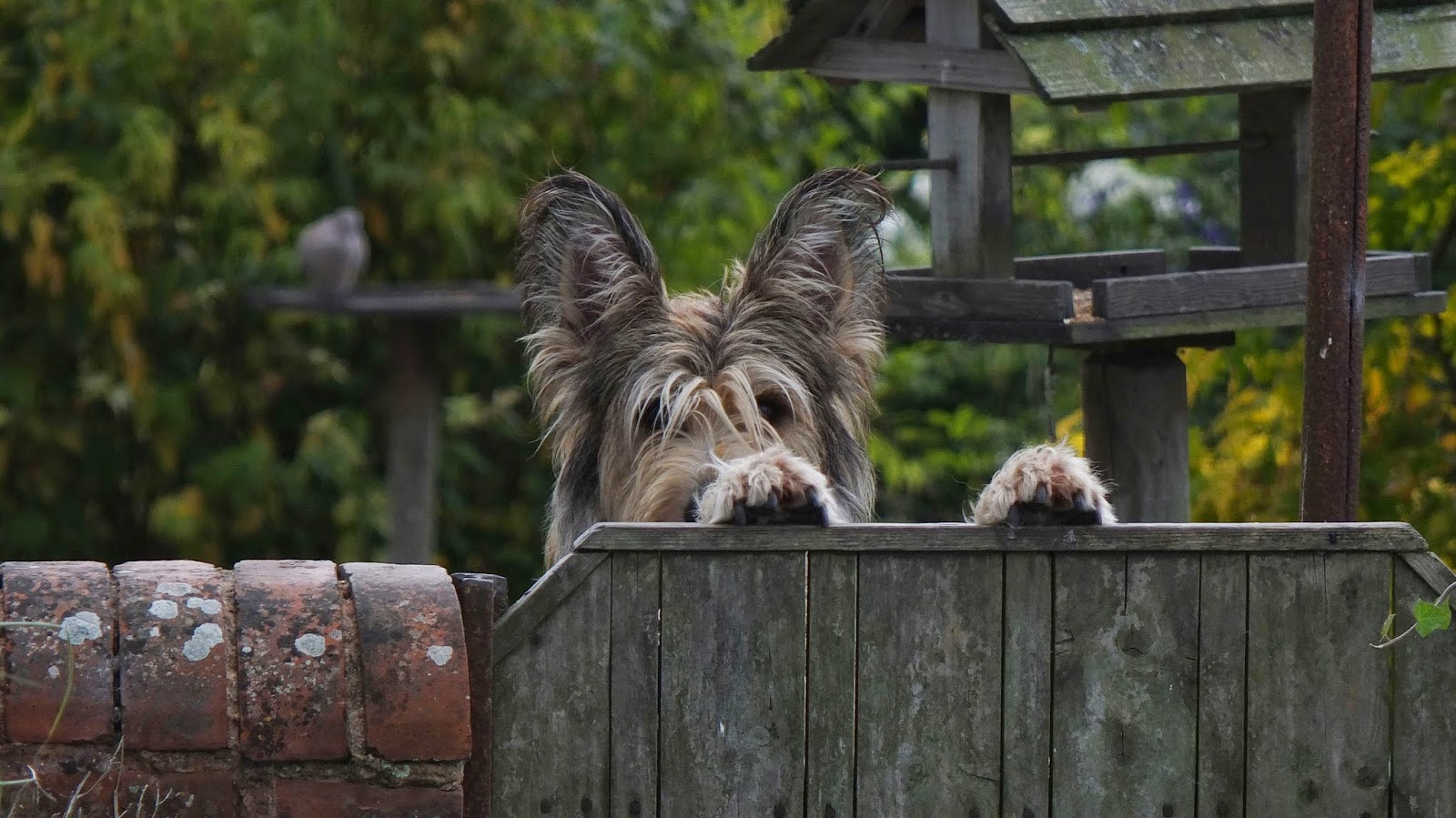 Just after this picture he went mental and wanted to kill me.  I beat a hasty retreat.

After seeing a Wookie I encountered a dragon 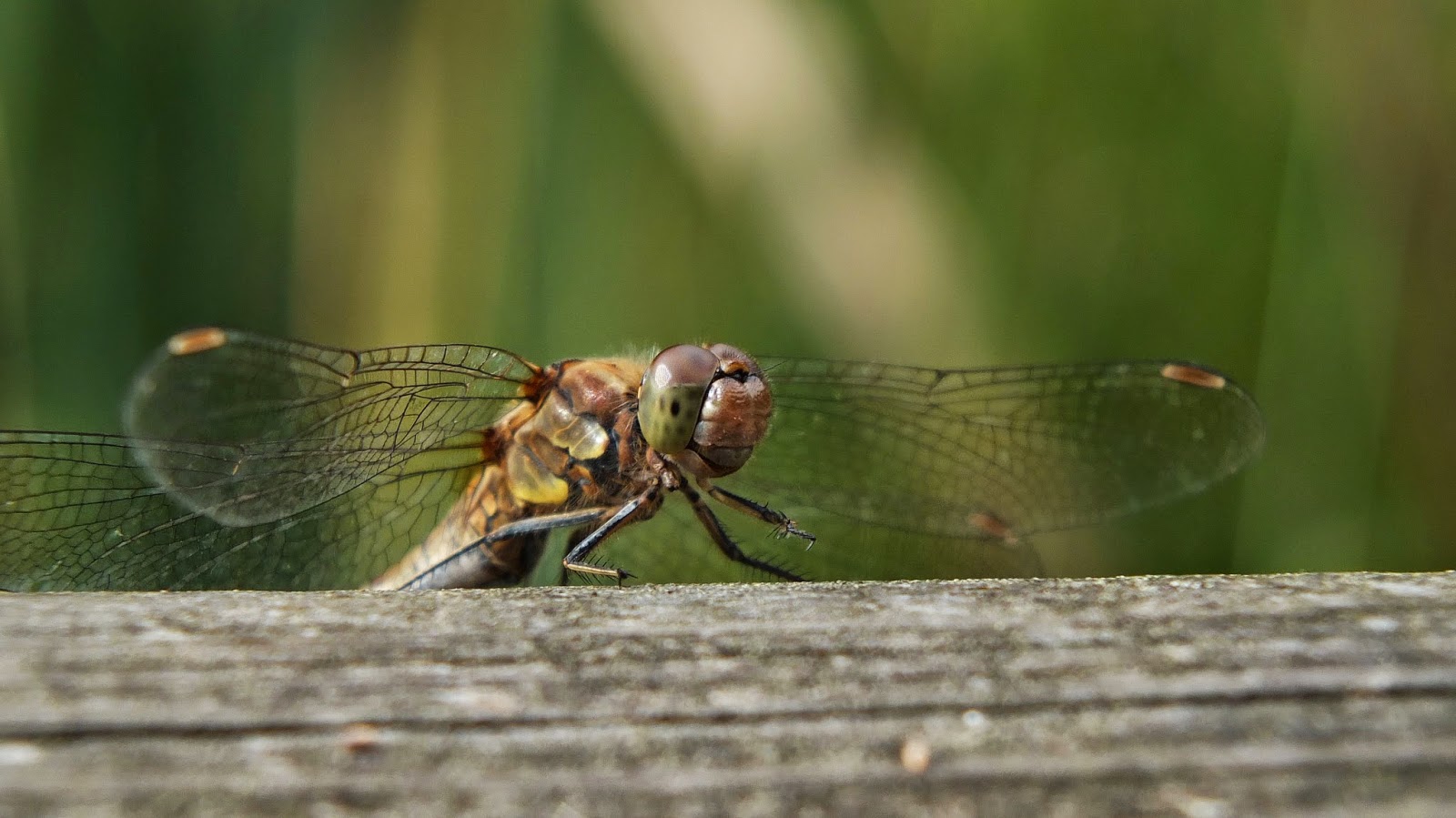